When I bought my 1901 Victorian treasure, one of the selling points was the gorgeous old windows. In the back of the house, where I planned to create an office and den, the windows were floor-to-ceiling and original to the home. The massive amounts of light that came through those windows was a boost to my days, even though I was well aware of how inefficient the windows were. It was especially clear during that first winter, when I was freezing while sitting in front of the roaring fireplace.

I knew I needed to upgrade the windows, but I didn’t want to sacrifice the original windows for something more modern. For a long while I didn’t know where to begin. That changed by sheer necessity, when the summertime roared down with record temperatures and I realized the sweltering inconvenience of windows painted shut! 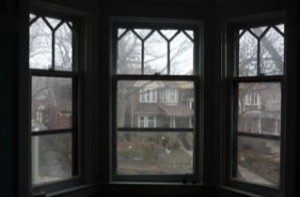 Old windows much like mine. Picture courtesy of Planet Green.

I started with the paint. It was caked on, layer after layer, and looked as though no one had bothered to peel any of those layers off since the original painting over a century before. I tried the heat gun (which scared me half to death), the scraping method (which soon became downright painful) and then paint thinner (a method I would not recommend if you want to keep your brain cells intact). Slowly but surely, the paint slipped, scraped or melted away, and I was left with wood that was in surprisingly good shape.

Unfortunately, the homeowners before me had used paint as a kind of sealant against the elements. Every layer of paint removed made the windows much less sturdy in their frames. These were very large sheets of delicate wavy glass, some of them six feet high–and in some cases, there was almost half an inch between the glass and the wood. It soon became apparent that cleaning would not be enough, and serious restoration was in order. I continued attacking the paint while I tried to find a good contractor to handle the situation.

What I thought would be an easy job turned into a restoration project that took almost two months. As a result of the house settling over time, the windows were no longer perfectly straight. I watched as he patiently shimmed and twisted the windows, easing them closer to their original lines.

Then I discovered the joys of weight and pulleys, and learned that the odd rectangular shape on each of my windows was called a knockout panel. The name was appropriate, because the contractor simply slid the end of a screwdriver into the groove beside the panel and knocked it right off. Behind the panel were all the trappings that actually made the window work. I was as delighted as a kid at Christmas!

The contractor was happy to show me exactly what he was doing with the windows, and soon I was pitching in by prying apart trim, removing sashes and of course, continuing the laborious paint removal. It took a great deal of time and effort, but the day when I opened all the windows and let the breeze flow in for the first time in decades was a sweet reward. Since that lesson in window repair, I make a point of watching contractors work–it is amazing what a homeowner can learn from simply sitting back and observing an expert.