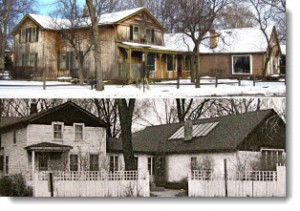 If any of us who have ever loved an old house had a quarter for each time we’ve heard someone say some version of the above, we’d have quite a bit more money to remodel those ol’ money pits.

But sometimes it’s for love, not ROI.

Ol’ sentimentality and history are both good for that, too. Wojtek Bialy is the project architect who is proposing to purchase the Alfonso Iannelli house in Park Ridge, Illinois, tear it down, and built townhouses that will enhance the neighborhood and comply with zoning requirements.

The article in the Park Ridge Herald Advocate didn’t say whether or not Bialy knew who Iannelli was, but the property isn’t yet on the National Historic Registry. There’s a group in Park Ridge, called the Kalo Group, who is working to change that by purchasing and preserving the property.

I’ve posted quite a bit in the last few months about endangered historical properties, shrinking government preservation budgets and tax incentives, and the need for grassroots historic preservation. A hundred years ago, if you wanted something funded, you raised the money within your community — not through program funded by taxpayer dollars.

The Kalo Group in Park Ridge is a great example of a relatively new group who organized in order to preserve specific pieces of arts heritage in Illinois. They originally organized in 2006 with the intent of preserving the Kalo Arts Crafts Community House. It was founded by Clara Pauline Barck Welles in 1900. For 70 years, the “school within a workshop” trained hundreds of silversmiths, jewelers and other artisans, which was pivotal for Chicago’s role in the American Arts & Crafts movement as a leader in jewelry and hand-wrought silver.

Now that workshop is a private residence. A year ago, the Kalo Group shifted their focus to preserve the studio of Alfonso Iannelli, one of the first recognized American abstract modernists and a well-known designer and sculptor. He was known for integrating art into architecture and later joined the industrial design movement, designing household appliances for companies like Sunbeam and Oster. Their ultimate goal is to turn the studio into a museum to showcase Park Ridge’s art history.

We often hear people argue if a building is or is not historical. There isn’t a doubt that Iannelli’s studio has some historical significance. But it isn’t registered and that wouldn’t be enough to preserve it if the Kalo Group wasn’t involved. The building is currently owned by a trust. The rezoning plans for the townhouse proposal must go before the city’s planning and zoning commission later this month. If the plans are approved,