An old house in a young city

By American standards, Jacksonville, Fla., which was named after President Andrew Jackson in 1822, probably can’t be considered a young city per se. It is a sprawling city, the largest in the U.S. based on square miles — and one of the nation’s fastest-growing metropolises, too.

That said, I can’t help but think of a recent trip to England where medieval villages are no big deal and a home or building built in 1848 might not garner a second look. That’s practically new construction there.

But buildings older than 150 are something special here on the other side of the pond, as evidenced by a recent feature story in the Florida Times-Union about Jacksonville’s oldest continuously occupied house.

Marketed as a tear-down to the couple who bought it in 1997, the modest 161-year-old Gothic Revival farmhouse had been a rental property for many years. But Mike and Laura Langton didn’t see it that way.

“I think everyone, deep down, does prefer an old house,” Mike Langton told the paper. “Especially if you can make it a modern house with all the amenities.”

They decided to keep and gut the original farmhouse — which is nicely situated on 160 feet of Arlington River frontage, complete with enormous live oaks and magnolias around the house and sweeping downtown views. They added a 2,000-square-foot addition, as well as a detached garage with a 500-square-foot room above it.

The couple and their architect took care to reuse original materials and respect the home’s history. The old house’s original heart-pine floors, with planks of a varying lengths, were refinished, old doors were salvaged and many windows feature original panes of glass, wavy finish and all.

The Langtons also worked with the Jacksonville Historical Preservation Commission, which had sought to preserve the house. In all, it took 14 months of construction. And while they have a beautiful old-new house to call home, that’s not all the couple got for their efforts.

Laura Langton told the Times-Union that, even after the new construction, the family spends most of its time in the old part of the house.

“It’s been incredibly rewarding, and that never ceases to end,” Mike Langton told the paper. “People come to the house for the first time and they show such joy in seeing what we’ve done, preserving this house forever. You fill up with pride.” 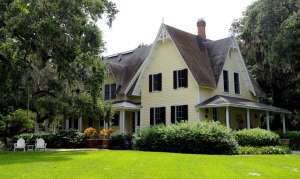 Courtesy of the Florida Times-Union.

With new construction, you never really hear those kinds of stories now do you?