I spend a little more time out and about around the holidays because I enjoy looking at the decorations and I like being around people when they are full of the spirit of the season. One of my routes through town takes me past an old house I’ve admired since moving here 20 years ago and the week prior to Christmas I noticed quite a bit of activity taking place on the property. The home sits on a large corner lot with several mature oak trees, and it’s at least as old as my home or perhaps even older. 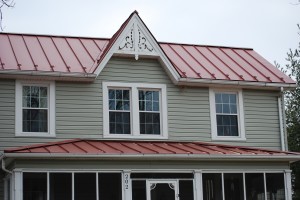 The old house changed ownership a few years ago and one of the first things the new family did was install fresh vinyl siding in a pretty shade of green, and all the wood windows were replaced at the same time with modern energy efficient vinyl units. It became obvious that the new owners wanted to keep the old house’s traditional appearance, but at the same time bring the home into modern times in terms of energy efficiency.

The activity the week before Christmas was a new standing seam roof metal being installed. I was pretty surprised as not many people around here have a new roof installed during the winter, and it was unseasonably cold here the week before Christmas; I think the highs were in the mid 20s. The roofers finished on Christmas Eve and they did a great job as the roof blends right in with the old house. If I hadn’t seen it going on, I would have thought the metal roof was as old as the home and had been painted recently. 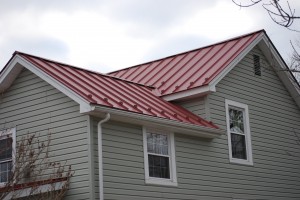 I had a chance to talk to one of the old house’s owners a few days ago, and she mentioned they installed the new roof in December to take advantage of the energy tax credits before the end of the year. The roof looks just like old standing seam metal panels, but it’s now Energy Star rated. She said the entire tear off of the old roof and installation of the new had been about $9,000, which I found to be very reasonable considering it’s a pretty big house and just the snow guards were about $750. Most of the time energy efficient metal roofs have coatings that reflect the sun’s radiant heat during the summer and they can contribute to lower cooling bills, but she said they’ve even noticed a reduction in heating costs in the few weeks the new roof has been on the old house.

My photos may not do the roof justice, but if you want an energy efficient roof for your old house, a modern standing seam metal roof can look old, but still give you the benefit of today’s technology and energy savings.