An Ounce of Prevention: Old Houses and Fire Hazards

I burned a large pile of brush in my backyard a couple of weekends ago. The pile had been accumulating for several years and had gotten so large I had to spend an afternoon separating most of it to get down to a safe and manageable starting point. In addition to the usual tree limbs, leaves, and cut up logs from a tree that had fallen were some parts of a sleeping porch I had taken down last spring that couldn’t be reused due to rot and insect damage.

I called the local volunteer fire department to let them know what I was doing and set the small pile I was starting with on fire about 2:30 in the afternoon. By around 6:00 p.m. all I had left were smoldering ashes. I have burned brush many times over the years, but I had never had a pile that large burn that fast and with so much heat. Every time I threw a couple of boards from the sleeping porch onto the fire, it flared up and I could feel the heat singeing my face and arms; I have no doubt that the reason the fire burned even the large logs so quickly was because of the dried and aged wood of my old house.

Do a Fire Prevention Inspection on Your Old House

Fires and old houses don’t mix very well as old homes in Beaumont, Texas, and Atlantic City, New Jersey, discovered this year. The 100 year old home in Texas was in the process of being restored and even had a sprinkler system installed, but sometimes the framing style used in the old days can make it easier for a fire to spread quickly. 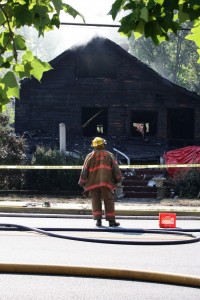 Make Sure Your Smoke Alarm WORKS photo from pressofatlanticcity.com

The time is rapidly approaching when fireplaces will be burning and space heaters are going to be plugged in; it’s important that you take time now to do all you can to make sure your home is as safe as possible from potential fire hazards. I wrote last autumn about old house fire safety, and a few items are important enough to repeat for this season and every season:

Take some time in the near future to give your old house a thorough fire prevention inspection; you’ll sleep better at night knowing you did.