Over the past two years, I’ve been inspecting significantly more buildings that are vacant.  Some, because of the amount of time they sit on the market, owners have had to move on.  Others are because of bank foreclosures.  The theft of “parts” from these buildings initially started with some exterior elements.  Copper gutters and downspouts, copper conductors from lightening rod systems and the coils from air conditioning compressors were the most common missing items.  When our economy really took a dive, the thieves moved to breaking and entering.  In some buildings, after all the exposed copper plumbing is removed, the thieves bust large holes in the walls looking for the concealed pipes.  Occasionally a church bell disappears. 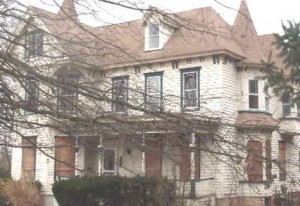 I’ve heard of some attempts at getting local governments to try to mitigate these thefts by quickly boarding up and securing vacant buildings.  I’ve even heard a proposal for one city to enclose building lots with high fences.  Not much has been implemented – this costs money.  I can’t help but think that the scrap dealers have some responsibility to “sense a rat” and call police.  I wonder if regulating the scrap dealers would help.

More recently, there’s been a major increase in “architectural theft” from historically significant buildings.  It’s not just big ticket items like marble fireplace surrounds  and ornate railings.  Door knobs, window locks, paneled doors, stained glass windows and even simple moldings are being stripped from vacant homes.  These thefts often occur in daylight.  The thieves look just like contractors showing up to do work on the building.  This type of theft causes significantly more damage than by the copper-for-crack-money thieves.  It permanently eradicates original elements that part of the character of the historic building.  Here’s some pics of a crime scene.

This isn’t anything new for communities in Great Britain and Ireland.  This has been a major problem for their architectural treasures for decades.  Fine old buildings get stripped and the “parts’ are quickly packed into shipping containers and sent to the US for resale in some upscale architectural antiques retailers.

Us old house restorers act like kids in a toy store when in architectural salvage shops.  It might make a small difference if we take a few minutes to interview the proprietor.  I know some that won’t accept any merchandise without being confident that it’s from a legitimate source.  Also, looking out for and reporting suspicious activity at our empty neighbors might help preserve the character of our historic communities – and hope someone moves in soon (and doesn’t ruin it).