Are the old mega mansions of America's 'royalty' worth saving?

I have mixed feelings about the LaRonda Mansion, a 17,500 square-foot behemoth built in the late 1920s in Bryn Mawr, Penn., for leather tanning magnate Percival E. Foerderer. 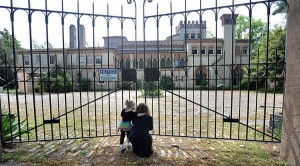 LaRonda from its front gates. Courtesy of the Philadelphia Inquirer

Despite a passionate campaign to save the 51-room Spanish Gothic/Mediterranean-style house, it looks as though it will be torn down, according a recent article in the Philadelphia Inquirer.

On Sept. 16, the Inquirer reported that owner Arthur J. Kania “sent in an architectural-salvage crew to haul away the remaining pieces of the 80-year-old house that are worth auctioning off or donating.”

Sure, it’s terrible the current owner plans to scrap it in favor of a new 10,000-square-foot house. But I have to wonder, what’s more sustainable? While a 10,000 square-foot home is far from green, LaRonda is downright brown. Yes, construction and demolition waste account for 25 percent of what gets dumped in landfills. But what would it take to retrofit La Ronda and make it energy efficient? What other purposes might the old mansion be remodeled to fit?

Since Foerderer’s 1969 death, the fate of the house has been in flux. First it was sold to Vilanova University. But it has since had many owners and is said to be in disrepair. The current owner has claimed that its lack of air conditioning has made it an impractical place to raise a family.

Really? Is that the only thing that makes it impractical?

Activists working for the home’s preservation point to the fact that it’s the only work in Pennsylvania of architect Addison Mizner, who is famous in south Florida for his Mediterranean-inspired resort designs. There are a number of credible organizations clamoring for its preservation, ranging from the Preservation Alliance for Greater Philadelphia to the National Trust for Historic Preservation and the Philadelphia chapter of the American Institute of Architects.

Still, that argument doesn’t really work for me. I love old houses, but this one makes me cringe. I can’t help but think of the mega mansions built by celebrities like Shaquille O’Neal, whose 20,000-square-foot Miami property was recently on the market for $25 million. Will people someday work to save this monstrosity?

That said, I do admit I could just be a hypocrite, who favors certain architectural styles over others. Honestly, what would Paris be without its palaces? The U.S. industrialists, magnates and celebrities who build these enormous homes are the nation’s royalty, after all.