Bottle Houses: Green Homes Before They Were Hip

Green construction and renovation practices continue to gain in popularity as people become more aware of the environmental impact of building and decorating materials used in homes. The popular mantra of “reduce, reuse, recycle” is making an impact and products such as countertops made of recycled glass are great examples of green choices for kitchen renovation. It’s hip to be green. 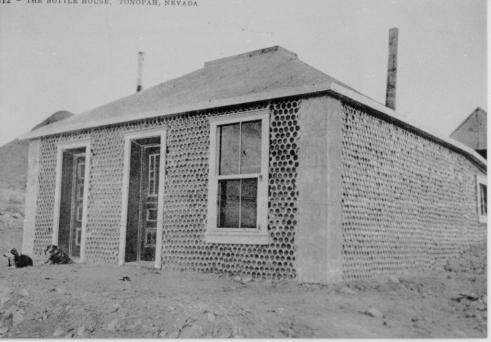 Bottle House, 1905. All photos courtesy of the the Central Nevada Historical Society in Tonopah, Nevada, home of the "Best Museum in Rural Nevada, 2010"

But back in the early 1900s,  “green” was the color of bottles. Beer and liquor came in bottles. Miners drank beer and liquor. Miners mined silver. Nevada had silver–but in rural, undeveloped parts of the state. Everything you needed had to be shipped and hauled to the middle of nowhere at considerable expense, which made building a house a little bit tricky. A lot of the early houses here were built from nearby stone quarries, but rock was still an expense and some people regarded it as unnecessary. After all, the bottles were already paid for. It was hip to be resourceful. 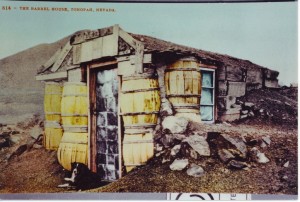 In 1902, one of the earliest bottle houses was built in Tonopah, Nevada. What happened to this bottle house? It was destroyed in the 1950s. Local business owner Bob Perchetti recalled going with his dad and brother in the 1950s to take the house apart because it was being bulldozed. Why? It was falling down and someone wanted to build a house there.

Another bottle house in Tonopah, less popular and without four walls of bottles, was coming apart and was also tore down. These early examples of the ultimately green construction are important historic old houses, but weren’t recognized as such at the time. 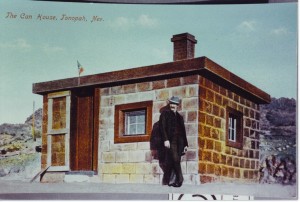 In fact, because of the potential value of the bottles, the remaining historic bottle houses are prone to theft. Don’t throw stones in glass houses? Don’t use them for target practice, either. The ghost town location of the Tom Kelly Bottle House in Rhyolite–one of the best preserved examples of a bottle house in Nevada– makes it a target for both, according to Sue Rigby, an archaeologist for the Nevada Bureau of Land Management. When historic buildings are on BLM land, it’s up to the BLM to preserve them.

The Tom Kelly house is particularly well-preserved, said Rigby, because it was lived in before the BLM became involved. The BLM restored the exterior of the house in 2005. The bottles were collapsed under the eaves, and bottles in the wall had been broken. Bottle were cut out or smaller bottles were placed inside larger, broken bottles. The replacement bottles actually came from dismantled bottle houses in Tonopah, courtesy of the Central Nevada Historical Society. The wood shingle roof was completely replaced. All the restorations done by the BLM must be reviewed by the Nevada State Historical Preservation Office, so all the work done is original as it can possible be, without being original.

In addition to bottles, wooden barrels, oil cans, and more were used as construction materials for homes–people used what was available. The lesson behind these early green houses is a good one. Aside from the point that unique old houses only exist when people act to preserve them, reusing any materials that are already on-hand is a smart first step.