For every story of an old house falling victim to the elements or new development, there is a heartwarming story of a historic home saved. My son, who happens to be well on his road to Eagle Scout, pointed out a home in tiny Charlestown, Indiana that is being restored to its original glory–mostly by hand–thanks to the a few private businesses and the Boy Scouts Lincoln Heritage Council. 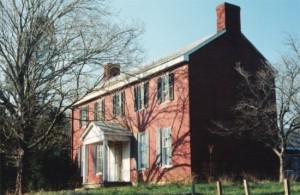 The 1811 John Work House is on the National Register of Historic Places, but in recent years had fallen into disrepair. It was abandoned in 2001 and was soon taken over by vandals. The home gained a reputation first as a ghost house, then as a party house. However, the house was built by hand with sturdy materials that survived the test, just as it had survived for two centuries.

Nathan Logsdon, owner of Taylor Rose Historical Outfitters, was thrilled by the original construction. “It would cost several million dollars to build a house to these standards today,” he said in an interview with the Louisville Courier-Journal. “Where we would use 2-by-4’s, he was using 4-by-8’s made out of poplar. He had access to tons of virgin lumber.”

The house is two stories tall, with four original rooms. There were fireplaces at the front of the house and a one-story kitchen at the back. An addition was built in the 1860s, followed by the addition of a two-car garage over one hundred years later.

Not only does the house have the construction that gave it the chance to survive all this time, but it also has a history within the walls. “We’re finding items nearly every day,” Logsdon said. “We’ve found an early 19th century padlock, an ornate skeleton key, probably to the front door of the house at one time, and a 1850 castor oil bottle with a label on it from a store in Louisville.”

Logsdon is handling the restoration with the help of friends and the occasional crew of Boy Scouts, who use the reservation on which the house sits. The initial vision is a five-year contract for restoration, followed by restoring the nearby mill and grounds. The project is currently six months ahead of schedule. And amazingly, most of it is being done by hand.

“It’s an expensive project, but not as expensive as it could be,” Logsdon pointed out to the newspaper. “If you have the know-how, you can do the stuff yourself. It was built by hand 200 years ago. We can restore it by hand.”

The restored home will be homage to the past. The two upper rooms will be turned into a research library and museum telling the story of the house. Already acquired for the museum is the Work family Bible, which was purchased at an auction by a neighbor in the years prior.

In my travels I see so many old houses that are falling into disrepair. Each of them has a story to tell, and it saddens me that they might never be heard. Stories like that of the John Work House give me home that some of our most precious historic gems still have a chance to be saved.