It’s that time of year, when architectural salvage and antiques are in the air…

I have no idea where the readership of my blog resides, but I’m based in New England. Those of us in the Northeast who are involved with the Old Stuff Biz are aware of a thrice-yearly phenomenon known as Brimfield. More formally, it’s entitled The Brimfield Antique and Flea Market Shows.

The town of Brimfield itself is based in central Massachusetts, about 65 miles west of Boston and 50 miles northeast of Hartford. It’s a quaint, quiet, postcard-pretty New England place that one might just happen through if they decided to travel across the state on the back roads instead of the Massachusetts Turnpike.

There’s a lot of junk interspersed with some finer things, diamonds in the rough and stuff that you just won’t see anywhere else. Brimfield is where the weirdest things show up; in fact the term “Brimfield Piece” has entered the lexicon. It connotes something that you wouldn’t ordinarily put in your shop, like an entire vintage outboard motor collection. Or a whole stuffed moose.

Dawn patrol at Brimfield is a mad scramble; hundreds of buyers rush in, flashlights at the ready, rolls of $100 bills in hand (although many dealers have lightened up on the “cash only” policy and now take checks).

Brimfield is a place for the fleet-footed and quick-witted; he who hesitates goes home with any empty minivan. I missed a rosewood Alexander Roux gothic side table by literally five seconds once: some guys were hauling it off their truck, and a bitter competitor (F—— A——) was two strides closer to their booth than me:

He hollered “How much?”

I screamed “I’ll give you $400!” (Okay, it was worth at least a couple of thousand), but the dealer went with the first guy to speak. Fair enough; that’s protocol, and frankly, many times in the past, it’s been me who has gotten got there first.

Brimfield’s allure for the old house lover is more than mere furnishings; it’s a great place for architectural salvage. Some dealers specialize in antique tiles suitable for fireplace surrounds, others have table upon table of light fixtures or vintage hardware. There are booths devoted to fireplace mantels and doors while some dealers specialize in stained glass. Most of these specialists’ wares are in good condition, and they’ve been cleaned up to some degree to make them more saleable. But, if you’re good at spotting potential, great deals can be found in the booths of someone who cleaned out an old carriage house and ordinarily handles, say, buggy parts, but happens to have scooped up a golden oak overmantel that is still dusted with a fine layer of dried horse poo. He doesn’t want to haul it home, and if you’re there on Sunday, you might just walk away with it for $100 cash.

This is the critical caveat: bring your measurements! If you can’t remember that your front door jamb is 36” wide, you’re going to feel pretty sheepish when you discover you’ve just bought and dragged a 42” door across three states. Likewise for those dragon andirons…sure, they looked like a normal height out in the middle of a field, but there you are trying to stuff them into a firebox that’s two inches shorter than your latest acquisition.

On the other hand, if you don’t have fixed dimensions to work with, there can be great finds, especially for gardens/exteriors; there are always urns, benches and columns to be had.

Don’t delude yourself into thinking that the dealers here are a bunch of hicks: Everyone knows about eBay, even here in rural New England. More likely, the dealers can be pragmatic, and might be willing to flip something for a quick buck versus holding out for top dollar.

They can slip up, though. I was there recently, and found this cabinet attached to the back door of a van with a drywall screw (fortunately, it was affixed through the metal bracket and not rammed into the back gallery, as I have seen far too many times).

I saw it, and thought “aw, hell, he’s gonna want $500.” And yet, when I asked the dealer his price, it was so low, I was too shocked to bargain, and paid asking…

September Brimfield Starts next week: you can read the FAQs on this website. 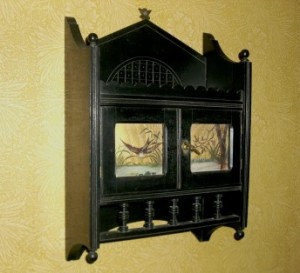 Bought at Brimfield for less than a very good dinner.