As I have said so many times on this blog, it breaks my heart to see so many possibilities for a great historical property fall victim to neglect or new development. It is always refreshing to see the opposite happen. It is especially refreshing to see it happen to an entire town.

This summer I had the opportunity to spend a great deal of time in historic Bucks County, Pennsylvania. As I explored lovely Doylestown and the surrounding area, I was pleased to find a very active Historical Society dedicated to preserving the buildings and culture of the town. 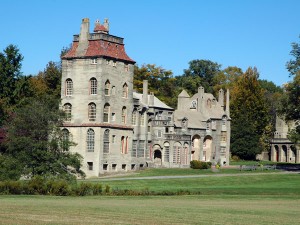 Doylestown and the surrounding area are full of history. The quaint old houses that now serve as home base for law firms, investment gurus and real estate agents all feature handsome plaques where their original build dates are inscribed. Most of them were built in the mid-1800s. Even buildings that are no longer there have their moment in history marked, such as the spot of the old school, which now features peaceful trees and benches a stone’s throw away from the courthouse. Businesses thrive in the busy yet quaint downtown area.

It wasn’t always this way. In the early 1960’s, shopping centers began moving in, and that drew customers away from the downtown. Stores began to close, and many storefronts were empty. It is a sad story that has been repeated over and over in small towns across the United States.

Something had to be done. A plan that included urban renewal funds was proposed, but it would mean tearing down more than 20 historic properties to make room for a parking lot. That’s when Doylestown citizens stepped in with an outcry of protest and took matters into their own hands.

Since then, the revitalization of the downtown has been impressive. Eclectic little shops do a brisk business alongside big-city staples like The Gap. The County Theater opened in 1938, and today the two screens operate as a non-profit community project. Despite the presence of a massive and much more modern theater just a few miles down the road, when I attended a showing of a classic movie at County, the room was packed. Almost every seat was filled!

Big draws in the town include four world-class museums, which are historical marvels in their own right. Fonthill Museum was the home of Henry Mercer, who made a career of many things but made his true mark as a collector. The massive home, which looks very much like an old-world castle, features Medieval, Gothic and Byzantine styles and is one of the first examples of a structure built with reinforced concrete. Mercer also built Mercer Museum and Moravian Pottery and Tile Works. These properties are maintained by the Bucks County Historical Society. 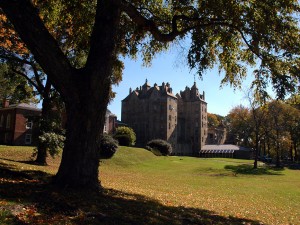 Across the street from the Mercer Museum is a property that looks suspiciously like a prison–and that’s exactly what it was. The James A. Michener Museum, showcasing the works of the late author, was originally built as the Buck County Prison in 1884. After a century, the building was being torn down when County Commissioners stepped in and agreed to lease the old prison to create the new museum. It opened to the public in 1988.

Walking through Doylestown and venturing into broader Bucks County is a history lesson around every corner. From the old buildings that have been beautifully restored to the Pearl S. Buck House out in the countryside, each historical landmark is a sign of victory for those who want to keep their heritage alive.

This is what can happen when truly dedicated community members form an active historic society and then use their time and money to back up their commitment. If a historical society were this active in every community, the world might be an even more interesting place.