Called on the Carpet III

Last week, I wrote about reversible, flat-woven carpets, and went into detail about the Venetian and Ingrain carpets that were and are appropriate for historic houses in America during the late 18th and 19th centuries.  This week’s subjects are the pile carpets that were woven concurrently during this era.

We’re all familiar with pile carpet; it’s the wall-to-wall floorcovering in many of our homes.  The pile, or cut ends of the yarn, faces upwards, and we walk upon it.  When flipped over, the backing side is a tight, scratchy grid of warp, weft and tufts of yarn.

As previously mentioned in Chapter I, the carpet looms of this period produced narrow width goods, usually 27” wide that were then hand-sewn together, laid upon the floor and tacked down.  If you look at old photographs of interiors, you can often see these seams, referred to as gutters by those in the business, spaced neatly every 27 inches. 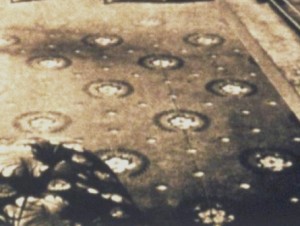 Carpet Seam (or gutter) 3/4 of the way on right

The premium grades of pile carpet were Wilton and Brussels goods.  The term Brussels originates from the first European carpets that were woven in Flanders and France; they were created by having the loom weave the yarn over rods, which were then withdrawn, forming a series of tightly packed loops.  If desired, these loops were then cut, which created what was termed a Wilton (or Velvet) carpet.  Next time you’re in a commercial airplane, look down at the cabin floor; it’s typically a Brussels, and you’ll see the little loops.

Here’s a trick to remember the difference:  a “W” (for Wilton) looks like the cut pile, while a “B” (for Brussels) is composed of loops. In the earlier part of the 19th century, the additional effort required in cutting and finishing the piles evenly to create a Wilton made it cost twice as much as a Brussels: today, this process adds just a small fraction to the price. 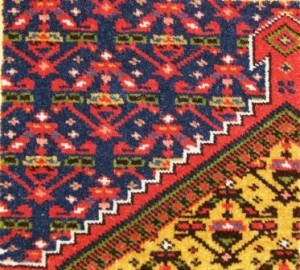 Wilton and Brussels carpets are essentially the same construction; all of the colored yarn in the pattern passes along the length of the goods, and the desired color for any point in the grid of the pattern is pulled up by the loom, as programmed by the jacquard card.  Therein lies the technical limitation of both Wilton and Brussels weaves; most (although not all) are limited to five colors in any given point, as all potential colors must be present inside the backing.  Additional colors can be “planted” with careful designing, and I’ll explain this next week.  On a positive note, this construction results in a denser, firmer backing and yields a carpet that is extremely long-lived.

In the second half of the 19th century, Axminster carpets became very popular as a lower-priced version of cut-pile carpet.  Because Axminsters were so prevalent, many people involved with historic buildings mistakenly refer to all strip-type carpets as such, when in truth, they could also be a Wilton or Brussels. Today, when one sees patterned carpet in a public place, such as a casino, hotel or restaurant, it is usually an Axminster.

Axminsters are more economical, for they use less yarn in their construction.  The pile is created by a V-shaped tuft of wool that is trapped in place between the warp and weft. This weaving method also allows for the use of many more colors, as it is not limited like the Wilton/Brussels construction.   For this reason, there were many carpets with huge sprays of flowers and Arabesques that could now be produced cheaply, and were available to the middle class, including outlets such as Sears and Roebuck. 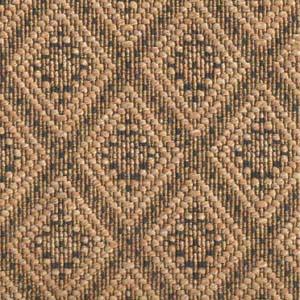 Sometimes many of these carpets patterns had matching borders that were either 13, 22 or 27 inches wide, and they were cut and mitered to frame the body of the carpet.  Borders were a rarity in the earlier part of the 19th century, and don’t show up in any great number until the middle phase of the Victorian era.  Eventually, they were designed for almost every pattern, and this trend seemed to occur as hardwood floors were becoming popular, when Wiltons et al were used as areas rugs as well as in wall-to-wall applications.  By the late 1870s, a narrow runner was often designed en suite with the body and the border.

I realize that this may not have been the most riveting post ever, but it’s critical to understanding the history of floorcoverings.  Next week will be a bit more visual: we’ll go into an overview of patterns as they evolved from 1790 through the early 20th century.