Called On The Carpet IV

A series of posts that address historic floor coverings in the late 18th, 19th, and early 20th centuries.

Full disclosure: I consult on and provide carpets for historic houses, museums and state capitols. This article may appear self-serving, and while it is, my words will hopefully clear up some misconceptions about historic floor coverings.

The invention of the Jacquard loom meant that carpet (or any textile) could now be woven by machine with a repeating pattern incorporated into the fabric. The pattern’s repeat could be as long as one desired; it just took a lot more of the painstakingly-made punch cards to program the loom. Some repeats were as small as four inches, while others of 48-60 inches were not unheard of. In fact, there’s a weave known as a Chlidema, where the body and border are integral, and I one worked on one that was well over 30 feet long!

Before the advent of computers, carpet designers would hand-paint one quadrant of the design on graph paper; this was referred to as a point paper. It was then “flipped” left and right and front and back to create the whole. (Similar to when you cut out paper snowflakes in art class).

A Brief Synopsis of the Evolution of Carpet Patterns

I’m going to break down the period of 1790-1920 into groups of a decade or two so that you can observe how carpet patterns changed with fashion. Just like all decorative arts and interior furnishings of this time, carpet designs coordinated with the popular trends of any given year. The following descriptions of pattern and color are admittedly very broad generalizations, but seeing that these posts are limited to 800 words, there’s no way to do the subject justice without writing a very lengthy article or even a book. I’ll freely admit in advance that there are exceptions to anything I’m about to mention…

Federal (or Regency) patterns could be floral or geometric, with both large and small repeats. The large-repeat classical patterns revealed the delicate lyricism of the Federal/Regency Period, and often, there were wreaths or architectural elements such as octagons and circles. Colors were surprisingly bright, and could feature orange and sharp blues; bear in mind that interior lighting was very dim.

The 1830s were a time of grand classical patterns, and we see the architectural elements of the Federal Period shift from stony gray to shades of bullion-like gold. Moreover, these motifs became much thicker and dense, like the Empire furniture that was placed atop it. Primary colors and strong greens were common.

Carpets patterns from 1840s were often Gothic or Elizabethan, and we also see the rise of the omnipresent Rococo Revival, which lasted almost to the end of the 19th century. The Rococo is often what folks think of when describing the Victorian Period; it conjures up visions of Tara from Gone with the Wind. Concurrently fashionable with the Rococo was the Renaissance Revival. Laypersons often have trouble discerning the two, but the Rococo was asymmetrical, and ornamented with flowers and arabesques, while the Renaissance was more architectural, based on the motifs of the Italian Renaissance, and much more symmetrical. Colors remained bright and primary based, although greens and reds shifted slightly towards Pompeiian red and Acid green, and the use of blue as the dominant color was very rare.

These styles lasted up until the mid-1870s, whereupon pattern flattened out into two-dimensionality. There was also a major shift in color palette: The hues were tertiary, with the most popular shades being olive, ochre, terra cotta and warm browns.

This marked the advent of a return to Medievalism as advocated by Charles Locke Eastlake in Hints on Household Taste and became known as the English Arts & Crafts Movement as spearheaded by William Morris. For example: Here is a three-dimensional Rococo pattern, and next to it is Morris’ “Lily” from 1875. 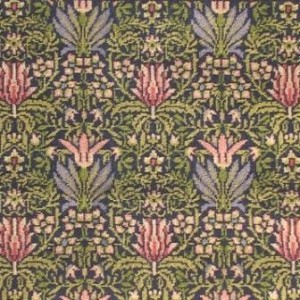 At the same time that the Arts & Crafts Movement was gaining strength, trade with Japan opened up, stimulating a furor for all things Asian. Decorative objects from the Middle and Far East influenced the design in everything from toothpick holders to wallpaper, and suddenly Paisley and Oriental rug patterns were in vogue. Hardwood floors with area rugs became the norm, edging out wall-to-wall carpeting, even thought the latter appears until 1900 or so.

At the turn of the 19th century, there were two dominant trends of interior design which collided headlong, often within the same household: Edwardian Classicism, and American Arts & Crafts (aka Mission or Craftsman). Edwardian carpets were very similar to Neo-Classical patterns

from the early 19th century, but were scaled down and more delicate. Their colors were typically jewel tones, while the Arts & Crafts patterns were very organic in color and abstracted in design. 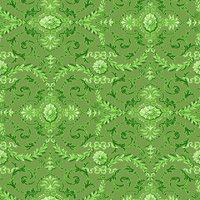 Patterned carpet remained popular well into the 20th century, and Art Deco designs were also available, while Modernism reduced the use of patterned carpet substantially, although patterns from the 1950s do appear in archives.

Next Week: Technical aspects such as installers and installation.