Called On The Carpet V

Putting it all together: Installers and Installation.

Because the carpets of the 18th and 19th century were woven in either 27” or 36” wide strips, they needed to be attached to each other is some manner, forming a “blanket” before they could be tacked down.  To accomplish this, the strips were hand sewn together in a whip stitch with large, curved needles, and the borders, if required, were then fitted around the perimeter.   Wherever the woven strips were cut, the raw edge was then sealed to prevent unraveling. Today, this sealing is done with liquid latex. 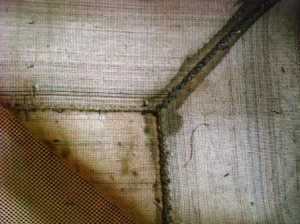 Backside of a mitered corner, note hand-sewing and latex

The art of attaching a carpet border and contending with the mitering of the corners is a test of the skills of an installer. A good carpet installer, or mechanic, as they were then called, can make a miter a thing of beauty.  It’s similar to watching a picture framer work with the fixed repeat in the border of a frame molding. With any rectangular rug, there are going to be four miters; two of them can be perfect, but the predetermined width and length of the piece dictates that the other corners will fall where they may on the repeat.  The measure of a good mechanic is how well he or she decides how to finesse these arbitrary corners and how they will cut the pattern so that it has some level of continuity and is not abrupt, leaving the design motifs of the border simply hanging in mid-air as it were.

Experienced installers also determine the direction a carpet should be laid by contemplating where the entrance is into a room versus the main architectural features such as a mantel or colonnade.  They always take into consideration centering the pattern underneath the chandelier or in front of the hearth, especially if the pattern contains a large medallion or other significant motif.

If a carpet is to be bordered around the perimeter of the room, it will invariably meet the hearth, and the installer, working with the client, chooses whether the border will simply run straight across the wall, as if the hearth was a mere interruption of the pattern, or in other cases, he can make a series of complex miters that wrap around the chimney breast and the hearth.  The latter treatment looks very impressive, but involves much additional labor and materials.

Another challenge installers face is working with winding stairs; one installer I use frequently carpeted a five story staircase in Beacon Hill, and not only had to contend with many pie-shaped steps that connected with long hallways, but also had to accommodate the bowed treads of the stairs themselves.

Incidentally, the historic method of affixing carpet on stairs is the “Waterfall” technique, meaning the runner hangs over the nosing and leaves a triangular gap in from of the riser.  The more contemporary approach is the “Hollywood” application, wherein the runner is tacked under the nosing, as well as at the base of the riser.

Wall to wall carpets used to be affixed to the floor with carpet tacks, but now, tackless strips are used, unless a museum specifies an authentic installation. (In some cases carpets were held down with pins and grommets so that the carpet could be taken up for cleaning.)

Once a wall to wall carpet is tacked down, the installer lightly sprinkles water over it with a broom, causing the wool carpet to contract, which yields a taut surface. In the case of an area rug, the carpeting is tacked down on the workroom floor and wet.  This technique is called blocking.

I’ve worked with perhaps a dozen or so installers over the years, but there are three firms who I’ve used constantly, depending on location.  All of them are brilliant and unflappable in the face of challenge, and they have saved my butt countless times.  They take unrivaled pride in their work, and never say “It’ll do.”  These folks will sew through a weekend to make a deadline, and then drive heroic distances to install the finished carpet for a museum opening. I’m mentioning them in alphabetical order, not in order of skill or quality. So here’s to you:

It seems fitting to end this series in praise of the folks who work wonders on behalf of me and my clients.  More than me, they’re the ones keeping this facet of historic floorcoverings alive.