Called on The Carpet

Q: What is the most historically appropriate floorcovering for houses built between the years of 1775 and 1875?

A: Anything but an oriental rug.

Even after 35-plus years of the preservation movement in this country, many homeowners and museums still believe that oriental carpets are an accurate floorcovering for most historic interiors with a period of interpretation before 1875. 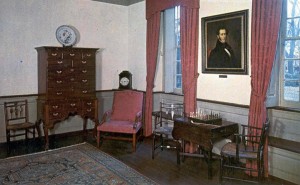 Countless times, I’ve wandered into some Georgian, Federal or Early Victorian house museum, and there, on those “pumpkin pine” plank floors polished to a high gloss, rests some tattered Bokhara that the beaming docent proudly proclaims as original.

In truth, those wide-planked pine floors, especially in the public rooms such as parlors, libraries and dining rooms, were never meant to see the light of day; they were intended to be covered with wall-to-wall carpeting (yes, wall-to-wall, just like the 1950s Ranch in which you grew up.) 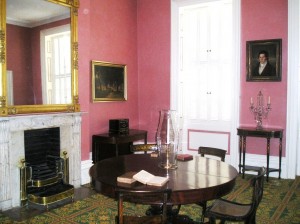 Look carefully at the perimeter of the floor where it meets the baseboard; you’ll usually see tack-marks every inch or so. They are frequently black, as the iron of the tacks leached into the wood.

Those holes were made by, ahem, carpet tacks.

Look again at those plank floors; a lot of them could hardly be deemed finish grade; for one, they’re pine (softwood, not great for wear), and two, there are knot holes (these can pop out, and are considered qualitative flaws in lumber). Some argue that there’s something precious about these floors as the planks used were unusually wide by today’s standards. Well, of course; it was old growth lumber and the logs were pit-sawn (until the late 1830s and the advent of the circular saw…

Folks wanted carpet back then. Houses were cold (no central heat) and carpeting counteracted this fact somewhat. Carpet also warmed up an interior aesthetically and quieted the echoes of clomping boots. On top of this, all the nice houses in England had carpeted floors, and we, as a nation, still looked to Britain for aesthetic advice, even as we were throwing their tea in the harbor.

Back in the day, or more precisely, back in the late 18th century, carpet was woven in narrow strips, as broadloom carpeting did not appear until the 20th century. The standard increment was 27” wide, also known as ¾ goods (as 27” is three-quarters of a yard…). 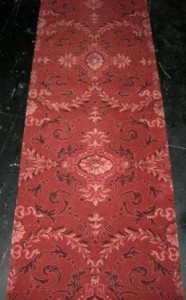 Carpet was occasionally 36” wide (4/4 goods) and sometimes, accompanying borders were 22” wide (5/8 goods). The 27” standard still holds true today for stair runners, and if you look on many an old staircase, you’ll see shadows of stair-rods past or tack-marks indicating that there was a 27” wide runner at one point.

These narrow strips of carpet were hand-sewn together to create a carpet of whatever size was required. The ornamental patterns, when they eventually appeared, were designed to match up at the seams, much the same as wallpaper is designed. Borders were available, and these were painstakingly mitered around corners and hearths, although these became much more popular in the mid-19th century. In an upcoming chapter, I’ll discuss the technical aspects of carpet and its installation.

Back to the Oriental Rugs.

Before the last quarter of the 19th century, oriental rugs were exceedingly rare and expensive in America and small, area-sized ones might grace the occasional table-top in wealthy homes. Carpet designers, first in England (from where carpets were imported), and eventually here in America, used existing oriental rugs as inspiration and designed what we refer to today as Turkey Patterns. These emulated the motifs and colors of oriental rugs, and were then woven as mass-produced goods. 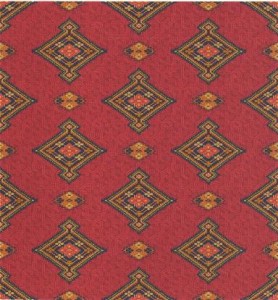 It wasn’t until the advent of the Aesthetic Movement in the 1870s and its fascination with art objects from the Middle and Far East that actual oriental rugs became within the reach of the middle class. Charles Locke Eastlake, in his epic “Hints on Household Taste” advocated for polished hardwood floors embellished with area rugs, and the unbridled popularity of his work (think of a Victorian Martha Stewart) created the demand making oriental rugs that were strewn about on shiny floors fashionable.

Concurrently, carpet manufacturer increased the number of Turkey patterns for their wares, along with geometric and floral patterns that coordinated with the interiors of the time. This began the demise of wall-to-wall carpets, but they did not fade from view until the very end of the 19th century.

We’ll also be discussing carpet patterns and how they evolved in an upcoming post.

Next Week: Flat-woven Carpets and the Beginning of Pattern