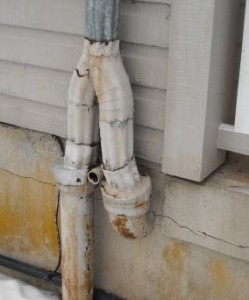 Cisterns, an ancient technology for the collection of rain water, were quite common at homes throughout the 19th century.   They can also be found at a few 18th century homes and some built as late as the early 1940s.  Using the roof as a rain collection surface, gutters and downspouts delivered water to the cistern.  Most had an overflow outlet and some had a diverter on the inlet, to direct the water away from the building when the cistern became full.

Although some were manufactured of iron, steel or made of wood, most were constructed below ground of brick or stone.  They could be made watertight with an interior parge coat of hydraulic cement.  After about 1900, formed concrete was sometimes used.  The masonry cistern chamber could be shaped like a vault, bell, beehive, jug or flat-topped with a wooden platform for the cover.  In my experience, most were a  large rectangular box located under a porch, with the porch floor being the cover.  As many porches eventually become enclosed and part of the living areas of the home, still active cisterns can contribute significantly to interior moisture.  There’s often still a trap door to access the cistern - a good place to lose kids or pets. 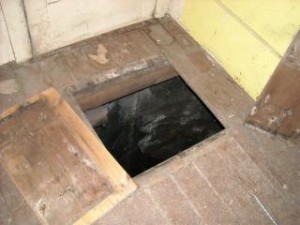 Most were built against the home’s foundation and water was drawn from a tap located low on the basement wall.  Some delivered the water with a hand pump.  The water, not of the quality for drinking, was mainly used for washing and laundry.  I’ve found a few large cisterns under barns that appear to have served agricultural water needs.  Even though the water wasn’t likely used for drinking, there’s still undesirable debris, like leaves, dirt and bird droppings.  The overflow would discharge some floating debris but the stuff that sank would need to be periodically cleaned out.

Although rare, there’s some remaining evidence of filtering the collected water.  Some cisterns are divided into two or more chambers encouraging debris to settle and finer particles were filtered out as the water passed through porous brick or stone partitions.  Some partitions were made with an interior cavity and animal charcoal, also called “bone black” filled the space, further purifying the collected water.  In the latter part of the 19th century, canister filters began to appear on some cistern outlets.

I’ve done the rain barrel thing, but only used the water for the gardens.  If I had a home with a real cistern, I’d be looking at a way to pressurize the water and delivering it for watering, washing and maybe even flushing the toilets.