Confessions of an Old House Newbie

When I fell in love with my old house, I had no idea what I was getting into. It wasn’t my first house — not by a long shot — but it was my first house that had that special charm. From the lack of air conditioning to the cranky plumbing, there were times that nothing in the house seemed to work the way I wanted them to. But it seemed to be okay for those first few months of the real estate honeymoon phase, when no matter how troublesome my old house got, it could still really do no wrong.

Then one night, the electricity went out. 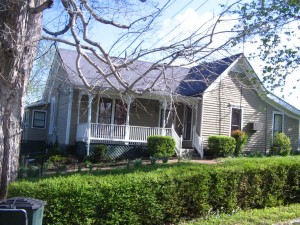 My historic (yet troubled) Tennessee beauty

Surely it was a simple problem. I checked everything I understood — flip the breaker, change the fuses (yes, the lovely old house had two separate electrical systems from the days when it was an apartment building) — then I called the electrician, as the untutored homeowner is supposed to do for these things.

That’s when the fun started.

“This wiring is so old and brittle that it won’t last when I fire this thing back up,” he said, pointing to the electrical boxes. “You need an overhaul. This isn’t safe.”

“The home inspector said it was,” I tried to argue, and the electrician nodded.

“Of course they did. It looks fine out here. But they didn’t have to dig into the walls. Your wiring should have burned this place down ten years ago.”

Then I saw the price tag for the complete electrical work on a 3,000 square foot house. It was not a good day, but that paled in comparison to the problem that cropped up two weeks later, when the electricity worked just fine but the plumbing suddenly did not.

Old house plumbing is an interesting beast. Some parts of the house had galvanized pipe, while another part of the house had copper. The grand trees that made the property so stately had wormed their heavy roots into the cast-iron pipes, blocking the drainage flow. The plumber spent two hours crawling through spaces in the house I can’t begin to imagine, and then came out with the verdict. “This is the worst mess of pipes I have ever seen,” he said.

What will it take, I asked, and he gave it to me straight: “We’re going to have to rip out all that galvanized pipe. Then we will need to get at the underground pipe and that means digging up the yard. Then…”

I’m not sure what came after that, to be honest. I tuned him out at the moment he started talking about tearing up the landscaping. That included the sidewalks, the flower gardens and the driveway. I was seeing visions of heavy equipment and quickly fading dollar signs in my future.

The basic home inspection for the house was just that — a basic inspection. According to the National Association of Home Inspectors, an inspector will never do any destructive testing, nor can they inspect what they cannot see. An inspection of the electrical boxes and visible plumbing showed no problems at all, and was noted as such. But those who love old houses know — as I do now — that the devil is in the details, and those details are hiding in your walls. Only a home inspector who is trained to handle historic houses can help you find exactly what is lurking in there.