Home / Old House Blog / Converting a Church into a Residence

Converting a Church into a Residence

I recently read about a guy that is now using his home as a church.  The idea was to almost eliminate the property tax.  Unfortunately, it doesn’t work when you convert a church into a home.

I’ve found that there’s a difference of opinion on church conversions.  Some seem to be against the idea of a “House of God” being used for any other purpose.  I think converting old buildings to a new use is the best way to ensure survival.  With the decline of church attendance and demographic changes of recent times, it seems that there are many more vacant church buildings that will likely fall into disrepair, unless deconsecrated and adapted to a new use.

I’ve had the pleasure of inspecting many converted churches and have gotten involved with a few pre-conversion.  The interior “sacred spaces” can be adapted to some wonderful living areas, but have also been made over into some unique business interiors.  I’ve seen church buildings converted into a restaurant, community center, antique shop, health center, art gallery, and even a bar.  It can be difficult converting the space to a new use without altering the character of the original building.  Some commercial uses may welcome the large open space of the original congregation worship area, but a residential conversion often begs for it to be divided into smaller compartments.   For many centuries, we’ve been used to separate rooms for specific activities in our homes.  If a family could adapt to a few small, private chambers off of a single, multi-purpose room, the interior character could easily be maintained. 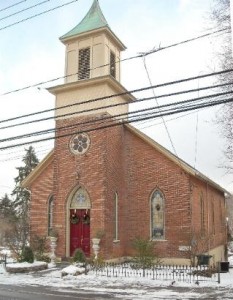 I feel it’s even more important to respect and maintain the historic character of the exterior of the building.  I’ve found that church structures were often built to a very high standard, with superior workmanship and materials (they probably wanted to impress their “Boss”).   I imagine the original builders intended the building to last forever.  Historic churches have usually been part of the community for at least a century or more.  Many have likely been used as much more than just a worship site.  Other functions often included community meetings, voting, charitable and social functions, to name just a few.  If you intend to buy, or are converting a church, I suggest being sensitive to the established community and past parishioners.  Don’t be surprised if occasional visitors appear, like a couple celebrating their 60th anniversary that have traveled back to the church where they were first married.  If you happen to be lucky enough to have an adjacent cemetery, don’t worry–they’re quiet neighbors.