Home / Old House Blog / Couple Saves a Piece of History in a Touristy Town of 10,000

Couple Saves a Piece of History in a Touristy Town of 10,000

As far as old house deals go, you might say Phillip Engel and Mark Goff got a pretty good discount on their new 140-year-old house in Healdsburg, Calif., in beautiful Sonoma County. Originally listed for $1.6 million, they snagged Marshall House for just under $1 million.

It’s 19 miles from the ocean, located in a historic downtown not far from Calistoga — and nearby Napa, for that matter … but this house’s story includes a lot of ‘buts.’ For one, it’s nearly falling down.

It’s either a bargain hunter’s dream — or nightmare.

The home has not been maintained for about 50 years. An architectural consultant told the couple the home was a borderline teardown. A 1969 earthquake damaged the home. And due to the home’s need for a new foundation, Engel and Goff were not able to obtain a bank loan.

It’s a charity case in many ways, like a mangy shelter dog, Charlie Brown’s scrawny Christmas tree … or perhaps more appropriate, a Death Row inmate in need of a stay of execution.

According to a story in the Santa Rosa, Calif., Press-Democrat on Aug. 28, the home’s electricity was shut off in the 1950s and the home’s wiring is still exposed in most of the house. Transient occupants over the years used extension cords for power.

“It needs love,” Goff told the Press-Democrat. “It’s a lost child and it’s just a fascinating building that makes you want to try and fix it.”

Built by blacksmith John Marshall in the 1870s for his wife, the daughter of a wheelwright, the Italianate Victorian was sold in 1902 to another family, who kept it until 1955. That owner sold the house for a $1 to his daughter, but she didn’t have the money to maintain it.

The home’s new owners — after adding a new foundation and roof — will create a small living space so they can stay there while doing most of the restoration themselves. The project will involve an incredible amount of work and money. But Marshall House will stand.

Zillow.com currently lists the city’s median home sales price as $515,000, and values in Healdsburg have fallen more than 8 percent year over year. Photos from Google Maps shows a street lined with similar old homes.  The New York Times profiled the 1800s-era town in its “36 Hours in …” travel feature in 2005, describing Healdsburg as a place where, “new shops and high-end boutique hotels have made it a destination for all things culinary.”

Whether the couple keeps or sells the house, in the end, they’ll have saved a piece of history. 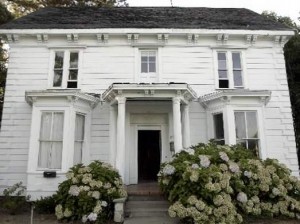