The George A. Bartlett House: Can House Restorations Be Cursed?

There are plenty of ghost tales throughout rural Nevada–it sort of goes with ghost town territory, I think. And though there are some local historic buildings where I have personally witnessed some heebie-jeebie stuff, the George A. Bartlett House is too depressing, even for a ghost. 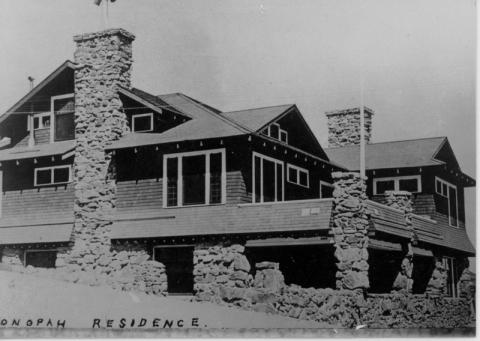 Photo, 1907, courtesy of the the Central Nevada Historical Society in Tonopah, Nevada, home of the "Best Museum in Rural Nevada, 2010"

What kind of depressing? The kind that takes a resplendent, historic home of 8,100 square feet and makes it decrepit. Also the kind that saw its most recent promise of grandiose restoration in 2008 abandoned once again this year. If not a restoration curse, why else would the resurrection of this once-beautiful home be derailed time after time? 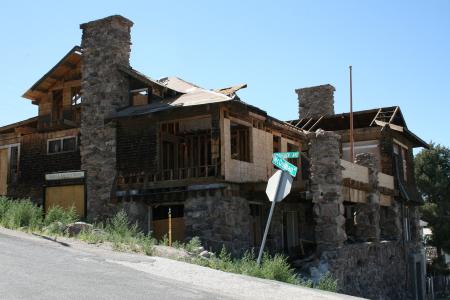 The George A. Bartlett house in Tonopah, Nevada, July 2010

The house Bartlett finished in 1907 is described architecturally as a two-and-a-half-story Eastern Shingle Style home. The foundation was carved from solid stone and the house and pillars’ now-aged stone was sourced from the mountain that backs up to the home. The living room on the main floor had two stone fireplaces and twin staircases. The walls of Bartlett’s study were covered with red leather. The master suite on the second floor opened directly to the deck that looks out over the valley and downtown. In all, Bartlett spent $75,000 constructing his home–the equivalent of $3,000,000 today. He lived in it less than a year. 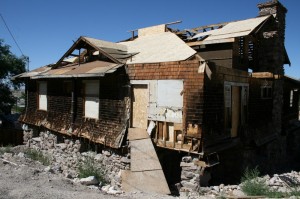 The rear of the George Bartlett House

Bartlett, a young, ambitious attorney, almost went bankrupt during the silver panic in 1907. Shortly thereafter he left Tonopah to serve as Nevada’s only congressional representative from 1907 to 1911. The house was abandoned, foreclosed on, and remained vacant. Later, the Knights of Columbus owned the home, then it was stuffed full of officers and airmen during World War II.  The house again sat vacant until the 1970s when it was sold for nonpayment of taxes. 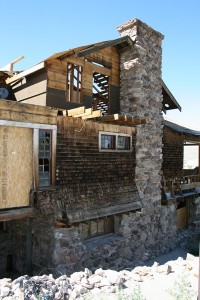 The southeast side of the Bartlett house

And now for the horrifying part that would make the story more depressing if it weren’t so horrifying. The home sustained the majority of its damage during the 1980s when a new owner–one of many with glorious plans of restoration–received an architectural salvage permit and gutted the home of all its woodwork, the leather from the walls, the staircases–everything. Then this owner lit dynamite inside the house so that he didn’t have to go outside to access the basement. The kicker? At the time, the house was already on the National Historic Register.

The house then went to auction again for unpaid taxes and was sold for only $2,000. This owner, whose family lived in Tonopah, also thought he would be the one to restore the George Bartlett house. He, too, failed, and sold the house to Denise Nelson and Michael Burnoroos, who, though new to the Tonopah area, had enough historic, old-house love to take on the project. 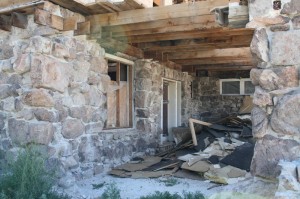 Debris from the beginnings of the most recent attempt at renovation.

But, once again, they also failed. The house has had its interior torn out, including the floors. The cement floors that had been planned for the first floor were not finished, and it’s unknown if the front of the house’s structural issues had been resolved. What happened? Nelson and Burnoroos followed a new opportunity away from Tonopah, only to have Burnoroos suffer health complications that prevented him from returning and working at Tonopah’s altitude of 6,000 feet.

Cursed? Perhaps. For over 100 years, this home has been waiting for an owner. How long can it wait?

Note: George Bartlett was famously known as the Nevada District Court Judge who believed in “easy” divorce and presided over more than 20,000 divorces between the 1920s and 1930s in Reno.