Dead As A Door Nail

So why is a door nail dead anyway?

One is said to be “dead as a door nail” because when doors were built of nailed together planks the carpenters pounded the nail through then bent it over on the other side. This is called “clench-nailing” and its one heck of a way to make a nail hold fast.

But why is it dead? Well, one story has it that if the house ever burned down–a pretty common occurrence in days before organized fire departments–the homeowners could salvage all kinds of stuff like earthenware, steel bowls, dishes, utensils. And nails. But because the door nails were clenched, or bent over, they couldn’t be re-used. 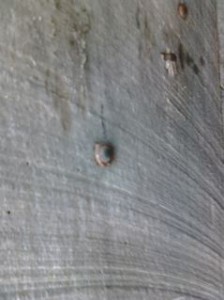 Door nails, dead but not deceased.

In the photos you can make out the nails’ heads. In between you can see the shank of the bent nail coming through from the other side. Another piece of trivia: what are the circular marks on the door plank? 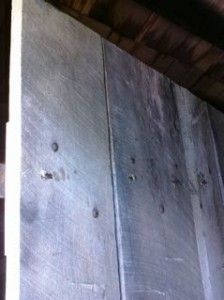 Wiktionary supports this perspective but doesn’t mention burnt house part. A dead nail is simply one that’s clenched and pretty much can’t be removed by anything but fire. And they cite the term as one of the many hundreds of neologisms (new words) of one Bill Shakespeare. (On a side-note, for a fascinating romp through Bill’s life–no poetry required–Bryson’s Shakespeare is great).

I love how house lingo opens into our every day lives. Everything from “proud nails” and “shiners” to bits and blades that “wander.”

Here’s hoping, by the way, you remain quite the opposite of door nails for many years to come.