Home / Old House Blog / Did it Herself: Renovating an Old Chapel

Did it Herself: Renovating an Old Chapel

In 2001 the New York Times ran an article about home improvement websites that were most helpful to the DIY set. Old House Web was one of the sites featured prominently in the piece. Last week I wrote about the growing trend of women renovators. I thought it would be fun to revisit one of the women who was featured in the NYT article, to see what she’s up to now, eight years later.

Cindy Bank’s, then an active member of the Old House Web forum community, was in the process of renovating a 1904 Victorian house in Portland, Oregon and was in dire need of motivation. She had previously restored two old houses, but this one was more of a challenge. Falling plaster, broken windows, an old furnace and a wet basement were a few of the problems she needed to tackle. She’d found encouragement among her fellow old house lovers who frequented the Old House forums. They cheered her on and one year later she reported that she was still knocking down walls and replacing floors and was at that time debating about when to pull down the house’s asbestos siding.

A number of women interviewed for the New York Time’s article, “Providing Fixer-Uppers With Tips, Tools and T.L.C.,” admitted to feeling more welcome online in forums like the one on Old House Web than they did in lumberyards and hardware stores. In fact, one member of the Old House Web forum community, Nicki Hendrix, said she had gone into hardware stores and been asked, “Where’s your husband?”

But that was then…

As I argued in my post last week, these days women are not only more serious about renovating on their own, they are also taken more seriously. I was curious about what had happened to Cindy Banks so I did a little googling and was delighted to learn that she has recently renovated an historic chapel 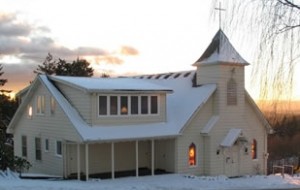 The church is located about 20 miles from downtown Portland, Oregon. It was built in 1931 and was at that time attended by the community members who had founded and farmed the area, mostly Swiss, German and Russian immigrants. From what I could see in the photos on her site, Cindy’s done a wonderful job of restoring the place. She also admits that there is plenty left to do, such as restoring the original floors in the sanctuary, and removing the paint and restoring the original wood in the pews. The church is now used for community events, weddings and the performing arts. In fact, one of the musicians who performs there is Cindy Banks.

I’m not sure if Cindy still visits the Old House forums on a regular basis, but I want to send her a little encouragement as she continues to follow her passion of renovating old buildings. Cindy, if you come across this blog post, congratulations on restoring yet another beautiful old building. And if you ever need motivation, the Old House Web will be here waiting.