As I’ve discovered the past several weeks, historic old houses come in all shapes and sizes. I’m not sure I could handle living in an old English defense tower conversion and while an old water tower home conversion sounds intriguing, that doesn’t seem like me either. But living in a romantic old lighthouse — now we’re speaking my language.

However, before I get into lighthouse living, I want to remind everyone about the twitter chat with Bob Vila on Thursday June 30 at 10:00 a.m. Ppacific time and 1:00 p.m. Eastern time. VinylSidingZone is participating in the event which can be followed at @VinylSidingZone and @BobVila. The hashtag to use is #GetReadyThurs. The topics planned for the twitter chat are exterior siding, painting, staining and general renovation topics. If you have any specific questions or just want to hear what Bob Vila has to say about exterior renovation projects, be sure to join us on Thursday June 30. You might want to ask him about lighthouse renovation.

Own your own old lighthouse

If you’ve always wanted an old home on the water, the U.S. Coast Guard has got a deal for you. Evidently, from time to time the Coast Guard has lighthouses that are no longer needed for navigation due to the advances in GPS technology. They usually offer these historical structures to local jurisdictions, but budget issues prevent many city and county governments from being able to handle the renovation and annual maintenance costs involved with owning an old lighthouse.

If a local government doesn’t want the lighthouse, it’s turned over to the GSA for public auction. This is all made possible by the National Lighthouse Preservation Act of 2000 and if you want to own one of these historic structures, you have to demonstrate you have the means to restore it to its former glory. That may be more difficult than it sounds as many of these lighthouses have been neglected for quite a while. Sea spray and gulls taking advantage of the convenient overnight accommodations have left these old buildings in pretty bad shape. 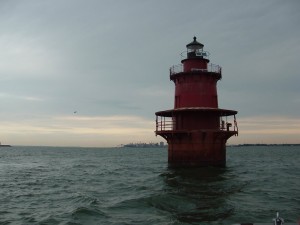 However, it’s definitely possible as these articles about families who purchased the Newport News Middle Ground lighthouse and the Thimble Shoals lighthouse off the Virginia coast show. If you have pets, lighthouse living might not be your best choice. The humans don’t seem to be having a problem climbing into the lighthouse in the Thimble Shoals video, but the dog appears a little nervous.

If going to sleep to the sound of waves lapping against the base of your home and watching ships pass in the night seems appealing, you can bid on your own lighthouse online at the GSA auction site. Two lighthouses off New Jersey that dated from the 1800s recently sold. There are currently two available in Ohio and one in Wisconsin. I can just about assure you that with lighthouse living – surprise visits from friends and family will become a thing of the past.