Every house that I’ve inspected, listed as a “Dutch Colonial”, has had very little in common with homes built by the Dutch in colonial America.  They were all actually colonial revival homes, built during the first 40 years of the 20th century, that had gambrel (double-pitched, barn-like) roofs.

I’ve had the opportunity to inspect  several actual colonial homes that were originally built by Dutch settlers in the 17th and 18th centuries.  I have also seen many other early homes that were directly influenced  by the unique Dutch-American building technique and form.  These details
are quite different than found at most homes built by other European colonists.

The most significant feature is the form of many of the houses.   When built of wood, the timber-frames are constructed with “bents”.  Bents are the joined sections of frames that are assembled with mortise and tenon joints, while laid flat, then each bent is raised to vertical (picture a barn-raising). Many of the surviving Dutch frame homes have H-shaped bents, which look a little like old-style football goal posts. Each horizontal beam is attached to vertical posts at each end.  These bents are usually spaced about every four feet.   The top plate anchors the top posts of the bents and the plate also supports the rafters. 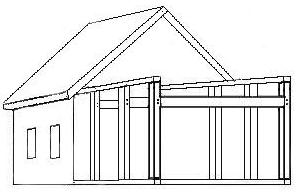 This H-shaped bent design raises the roof structure above the upper level floor, creating extra usable space.  This is quite different than early English or German built 1-1/2 story homes, where the rafters meet the exterior wall at the floor level.  This high-shouldered appearance is the most common distinguishing feature of the early Dutch-built homes.  In areas where brick was used for exterior walls, the actual load-bearing structure is usually still the H-shaped bents, within the walls.  Where stone was used for the structure of the home, the high-shouldered form is often created as well.  In later 18th century and early 19th century homes,  short windows within the shoulders can often be seen.  Later, these type of windows on fancier homes earned the title of “frieze band windows”. 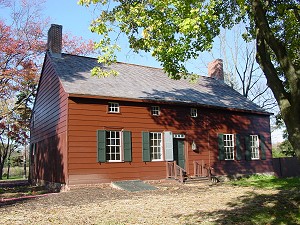 What’s interesting to me is how far this form of house, created by this early Dutch style of construction, has spread.  At one time, I used to think that the only Dutch homes were in the Hudson River Valley, Manhattan Island and the northeast corner of New Jersey, and they all had really steep roofs with stepped gables.  Many don’t realize that there were also Dutch settlements at the Upper Delaware river area, the lower Delaware river valley in NJ and at the bay in the state of Delaware.  There were also numerous areas between these upper and lower settlements that had Dutch residents since early colonial times.  This high-shouldered style, with the short lay-on-the floor-to see-out windows also influenced English and German house-builders in these regions.  This “vernacular” style persisted well into the last quarter of the 19th century.