In a previous post, I discussed a significant structural feature of many early Dutch homes that resulted in a specific form of house.  Below are some other features that are attributed to early colonial Dutch builders that influenced later home styles. 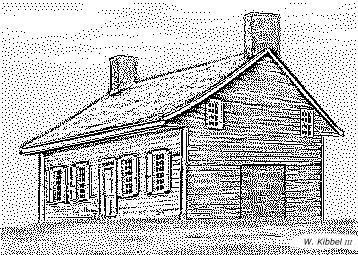 Most colonial 17th, 18th and early 19th century Dutch homes as well as Dutch influenced area homes have a chimney, or two chimneys at the “ends” of the home.   Very often, on the exterior of wood-frame homes, is the exposed stone of the fireplace.  The frame and exterior siding is built around the back wall of the main “open hearth” fireplace.  It has been suggested that the origin of this feature was for the attachment of a bake-oven, which had an opening into the back wall of the fireplace. While I’ve seen a few very old homes that had evidence of a previous bake oven, there have been many, many more that were originally built this way without one.

The Gambrel, or “Dutch Roof”

When discussing a “Dutch Colonial” home, most folks will immediately picture a home with a gambrel roof.  Although there are many 1-1/2 story early Dutch homes with gambrel roofs, particularly in western Long Island and northeastern NJ,  the roof style was not introduced by the Dutch.  The English colonists are credited with introducing the gambrel roof.  There are many early examples in English colonies on the east coast.  The gambrel was likely a welcome feature to Dutch homes, as it gave some additional usable area to the upper level living space.  This is  probably why it became so popular in some Dutch influenced areas – where the 1-1/2 story form persisted well into the 19th century. 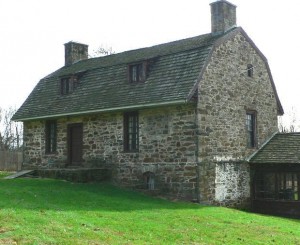 Wide, overhanging flared eaves were a more common feature than gambrel roofs on Dutch homes.  The flared eaves were also common on Flemish and French Huguenot built homes as well (but the “English” typically referred to them all as Dutch).  They have at times been referred to as a “Dutch kick”.  They were used on gambrel as well as gable style roofs.  When part of a gambrel roof, they are sometimes referred to as a “bell-cast roof.

The high-shouldered form of the Dutch house was perfectly suited for adding the wide eaves.  Some of the later homes had flared eaves so wide, posts were needed for support.  I’ve been in some early Dutch homes that have enclosed the space under the eaves, adding additional narrow living spaces.

Where the Dutch settled, they certainly influenced other nations’ colonial era (and later) home styles.  The Dutch colonists were also influenced by those of other nationalities.  I don’t think there are any homes of the same period in the Netherlands that have these particular architectural forms and features that I’ve described.