I’m reclining on a futon in what was intended to be our guest room–for the time being, it appears that it shall be mine. As I stare up at the ceiling, my gaze drifts from the two strips of affixed wallpaper, to the remaining blank, primed sheetrock with room for three more pieces. I wonder if they shall ever be hung.

It seemed like such a simple task: my partner and I would paper this tiny chamber, a mere 9 x 11 feet, on a weekend day. We started with the ceiling, and it was only going to be five strips, run the short way. I had carefully trimmed the paper, and we conversed amicably as I did so. It was charming–we each prattled on about our hopes and dreams as I held the straight-edge and cut, while my partner bagged the curls of cut-off selvedge.  We continued to chat cheerfully over coffee as she rolled the paste onto each strip, and then I would spritz the edges with water and book the paper. We were aglow at the prospect of working together, and feathering our little nest.

The ceiling is only eight feet high in this room, so I had set up two small stepladders about three feet apart; my partner would align each strip and perform the smoothing, and I would carefully support the bulk of the soggy paper, so it didn’t fight her as she worked. The first section went up quickly and smoothly. It looked wonderful, and emotions were buoyed at the thought of completing this in perhaps an hour or two.

And then we started with the second one. 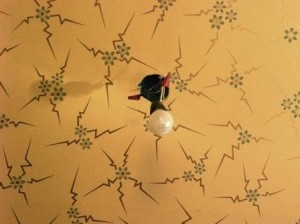 I guess it was my fault. She was trying to tighten the strip against the ceiling, and asked me (although in a slightly annoyed voice, if you must know–perhaps it was just frustration on her part) to ease up.  I responded “You shouldn’t pull so hard, you’ll tear it.”

I didn’t mean to sound admonishing, and perhaps it was because I had been holding my arms over my head for what seemed like half an hour, but thus, the disintegration began.

“But you’re going to wreck it…”

“You want to do it?  Do you think you can?  Remember that last ceiling we did and how you wound up scraping the color off of the paper with the knife?  It was right over the bed, and I still see that damned spot every time I open my eyes.”

“Why do you have to bring that up now?  Have you been dwelling on that for two freaking years?”

“No. Yes. Sort of.  That ceiling would have been perfect if I had done it.”

And then I went where no man should ever go:  “You just have to get personal! You’re a &@#%*, just like your mother…”

One would think I would have known better than that.  My partner glared at me silently. I immediately glanced downwards to ascertain the location of the razor-knife to see if it was within her reach. As the location of my stepladder was beyond an arm’s length, I was momentarily safe, for razor-knives are difficult to throw with any accuracy.

But there was no need for violence. She simply walked out of the room, and now, here I am, alone in the guest room, staring up at a partially papered ceiling. I realize that if either of us had undertaken this task with a buddy, it would have been jolly good fun, but there’s something about wallpapering that should never be done by those who share a bed.

Author’s note:  This is a work of fiction.  She made me say that.