Ten Minutes Could Save Two Grand

That’s two-thousand dollars in water damage from a frozen pipe that burst.  That’s in addition to the $250.00 for the repair of the pipe.

I see this at least once each year.  This year I’m seeing it a lot more than usual, since a majority of the homes I inspect are vacant, and many are bank owned.  I’m not talking about homes that have no heat or windows missing.  I’m talking about homes that have had a simple seasonal maintenance task neglected.  A ten minute procedure that would have prevented the outside faucets from freezing. 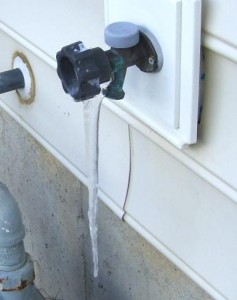 The older style outside faucets (also called “hose bibs”)  shut off the flow of water outside the exterior wall of the home.  When the water behind the valve freezes, it expands and either ruptures the pipe, or separates a piping joint.  This usually results in water entering into the wall.  This can easily go unnoticed for quite a while, creating a rather extensive repair project.  The insulation, wall sheathing and wallboard or plaster usually gets really saturated and if not dried immediately, nasty stuff starts to grow.  That means opening up the wall and replacing water damaged materials. I’ve seen some pipe ruptures create a wide spray that has saturated everything within a yard of the leak. If it’s at a home with a basement or crawlspace, they can quickly look like a swimming pool.

There should be a shut-off valve on the pipe somewhere before the pipe exits the “warm” area of the house.  After this valve is shut off, the outside faucet can be opened to relieve the water pressure and drain the trapped water.  Some of the inside shut-off valves have a little cap on the side of the valve that can be opened to bleed off any additional trapped water.  The hardest part of the process is remembering do this for every hose bib in time for freezing weather.

These have a long valve stem, so when the water is shut off, the valve seat is well back inside the home.  If it’s installed correctly, with a slight slope to the exterior, the water remaining after the seat drains out. 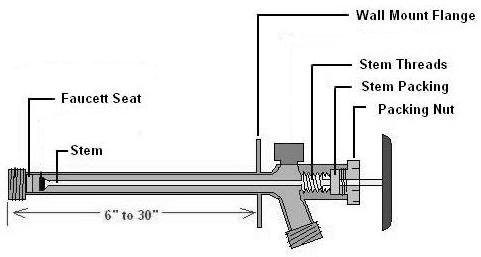 These have still been known to burst and cause water damage.  Not because of the design, but because folks leave hoses attached, trapping water that freezes.  With this design however, you don’t know it’s been damaged until you turn it on for the first time.