By: Matt Grocoff , Contributing Writer
In: Old Houses, Obsolete Design Elements, Home Improvement Tips, Green Renovations, Technology, In The News
2
Comments
Game over. LEDs win. Early in 2011 I wrote about the rapid ramp up of high-quality LED bulbs. Shortly afterwards, the big box stores started selling absolutely flawless bulbs at the eye-popping cost of $39.95. Even at that price the life-cycle payback still beat the old school incandescent bulbs for total cost. The problem was that it was about an 18 year break even.

That didn’t keep customers from grabbing these bulbs off the shelf. One big box store I visited said they were having a hard time keeping the LED bulbs in stock.

Now you can walk into a big box store and get a Philips Endura LED that uses only 12 watts for only $24.95. Today I was giddy over the sudden price plummet of these bulbs. You haven’t seen this kind of joy except from little Japanese girls finding Hello Kitty hats on sale. Please don’t judge me. 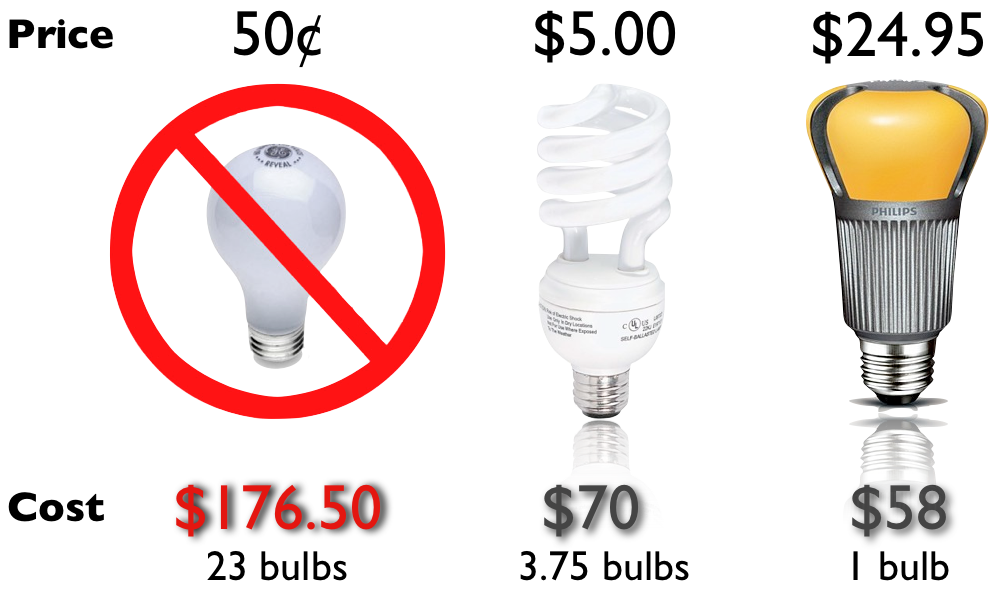 The $24.95 price of the Endura bulb may seem high, but the life-cycle cost drops the competition to floor like Bristol Palin off a mechanical bull. An LED is so energy efficient that it will use only $33 in energy over it’s life. The incandescent wastes so much energy in the form of heat that it does not deserve to be called a light bulb, but rather a heater that comes with an incidental light source. It will cost $176 dollars on your energy bill - and that is at current energy rates.

A single LED bulb will last 25,000 hours, so over the course of 20 years you’ll only need one bulb. The ones we are installing in our net zero house will not need to be replaced until after our two year old daughter has graduated from college. A good quality incandescent will get you about 1,000 hours and you’ll be climbing a ladder at least once a year to replace them. A good quality CFL (and we know there are many bad ones) will need almost four replacements, and if they break you’ll need to deal with a small amount of mercury that should be treated carefully.

Final score LED wins by a landslide in a head-to-head match with incandescents and by $32 over a CFL.
And . . . The LED is instant on, dimmable, 2700k (Warm light), 800 lumens (60 watt equivalent for brightness), and has no mercury.  This is the first apples-to-apples competition for incandescents.

This bulb is the game changer in lighting.  It’s the new four-minute mile.  Buy one before you lose any more money on wasteful bulbs.

For information on how to pick a bulb that’s right for you read “Nutrition Facts for Lightbulbs: How to find energy efficient light bulbs that don’t suck”

Matt Grocoff, Esq. LEED is founder of Thrive - Net Zero Consulting Collaborative, host of Greenovation.TV, a contributor to The Environment Report on Public Radio, the green renovation expert for Old House Web, and a sought after lecturer. His home is America’s oldest net-zero energy home and was called “Sustainable Perfection” by The Atlantic, honored as one of USA Today’s “Seven Best Green Homes of 2010″ and Preservation Project of the Year.  He has been featured in hundreds of publications and news shows including Washington Post, Detroit Free Press, Preservation Magazine, Solar Today, Fox Business News, Huffington Post and more.  Join him on Twitter and Facebook