“Dr. Henderson was a physician who specialized in ‘private diseases,’” reads the preliminary history of the house located at 1016 Paseo in Kansas City, Missouri. While that may very well end up being the first line of a short story I one day write, I’m not sure my imagination could invent anything as rich, yet mysterious, as Dr. Henderson. 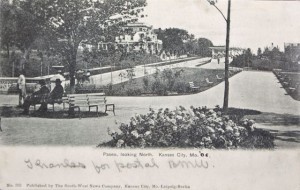 This Kansas City postcard from the early 1900s pictured The Paseo and Dr. Generous Henderson's house.

The good doctor, whose first name was Generous, is rumored to have treated Al Capone for the syphilis that led to the gangster’s death. Dr. Generous Henderson was a very social man whose trips down the Missouri River in his “party boat” have been documented, said homes research specialists Audrey Elder and Liana Twente in an interview. Little else is known about Dr. Henderson, aside from rumors and urban lore.

Elder and Twente own and operate Past to Present, a historic homes research business. You may remember Elder as the Past to Present real estate agent (of Reece Nichols) who listed the historic Stone-Gamble house featured here on OldHouseWeb.com for its accessibility. 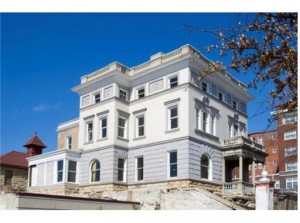 Elder and Twente have another historical research project up for sale: the house of Dr. Henderson. The duo have put together the history of this gorgeously restored Second Renaissance Revival home whose saving grace was the National Register of Historic Places and a local preservation organization’s intervention.

Back in 1895, the Board of Park Commissioners was formed with the task of bringing order and civility to Kansas City in an effort to attract higher-class residents. Slums were replaced by The Paseo, the first boulevard in Kansas City with parks within parks. The Paseo is 17 miles long and was the address of Kansas City’s landmark residences and influential people in the late 1890s, including Dr. Henderson. His 5,500 square-foot mansion was completed in 1899. 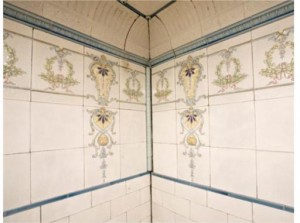 The house was grand — there’s no other way to describe a three story mansion that has a mahogany stairway that makes you catch your breath. On the second floor is a musician’s gallery, a 2 foot by 3 foot area for musicians to play as guests made their way to the ballroom on the third floor. Ceramic tiles, imported by steamship from Holland by a very reputable Kansas City company that was established around the same time and is still in business today, were used throughout the house.

Henderson died in 1924 and his widow sold the home. Like so many historic masterpieces, the large home became a boarding house then changed owners before making its decline. And again, like so many gems, it was passed around. “It had to go into someone’s hands because it on the national register,” said Elder, who listed the property for William Poole, the house’s current owner. “William was the first one to love it in a long time.” 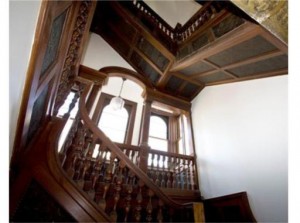 The mahogany staircase with musicians' gallery

Poole almost didn’t get the chance. In 1979, the house listed for $135,000 and stayed on the market for a year. The owners were going to resort to architectural salvage; instead, the Kansas City Historical Foundation made a deal to buy it within 90 days for $75,000. Later, an older couple purchased it with the intentions of making it their retirement project, but the house had too many problems and was sold again in the late 1980s, said Twente.

Four years ago, Poole bought the house rife with structural problems. Elder explained, “He’s done restoration of historic homes in the past. He said this house needed him, so he listed to that, and moved it, and he started repairing the house. It was a disaster when he bought it.” 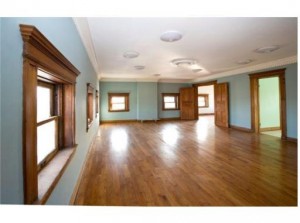 The ballroom, where Dr. Henderson used to entertain

In addition to the ballroom that Poole rebuilt, the house has five bedrooms, three full bathrooms, a living room, dining room, sitting room, study and several other rooms — all of which are completely renovated. Much of the original materials, such as the wood floors, tiles and fireplaces, were restored. The house’s interior walls are brick, which means the rooms haven’t budged. Did I mention the underground tunnel to the carriage house? (Could this house possible get any more impressive?)

Poole has kept a simple residence in the house’s basement as he’s restored and renovated and is ready to pass along this masterpiece to a new owner. Because the mansion was so well know and appeared on the city’s postcards, there has been a lot of interest in the sale, and Elder has showed it a few times. “It’s definitely going to take a unique buyer to purchase the home,” said Elder. The house is currently listed for $550,000.

The Paseo degenerated in the 1940s, explained Twente. Today, the area is in the spotlight once again and has  recently received a large amount of local funding and attention to increase its value and to protect part of Kansas City’s heritage. Hopefully, the Henderson House renovation is a sign of more good things to come for The Paseo.