Home / Old House Blog / Get ready for an alien invasion

Get ready for an alien invasion

They’re coming.  They’re already among us in the Mid-Atlantic.  They may be on their way to your old house.

I grew up in the country.  Bugs have been a part of my life for as long as I can remember. My policy has always been if they don’t bother me, I won’t bother them.  I will have to admit I’m not terribly fond of spiders and getting a face full of gnats on a hot summer day isn’t much fun. 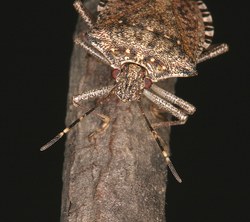 I was more curious than anything else when I saw a new arrival on the scene last fall.  At first there were just a few of them in my old house and then their numbers seemed to increase.  I wasn’t sure what they were or where they were coming from, but they seemed to be in just about every room.  These insects were a drab brown and moved very slowly, but could also fly a short distance.  They didn’t bite or sting or do any damage at all that I could see.  They just crawled. It got to a point that it wasn’t unusual to find one crawling across my keyboard or up my arm while I was typing.

I mentioned it to my parents and discovered that their old house had been invaded, too.  Experts now estimate that homes in about 28 states have been invaded by this alien intruder, and from what I’ve read it could become even worse this spring.  The brown marmorated stink bug is native to Asia.  It was first discovered in this country near Allentown, Pa. around 2001.  The bug has no natural predators here and is resistant to pesticides.  It seeks a warm place to spend the winter and then heads back outside to eat when spring arrives.

Old houses seem to be especially prone to invasion due to all the little cracks and holes in foundations and wood siding.  A Maryland biologist has found over 12,000 of the pests in his old farmhouse this spring.  They were even in his attic where they huddled in big clusters behind the insulation.  Evidently they also like to reproduce.  He has been filling vacuum bags with stink bugs.  As I mentioned, bugs don’t bother me, but if I see 12,000 of them headed my way, I may not be posting to the blog for a while. 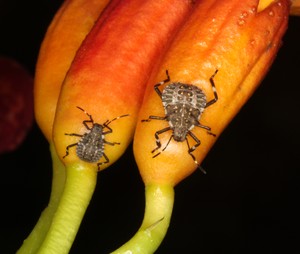 Penn State University has an excellent article on the intruders and discusses possible methods for keeping them out of your home.  They have been studying the bugs due to the damage they did to Pennsylvania’s peach crop in 2010. The stink bug likes to eat healthy and can consume vast quantities of fresh fruits and vegetables.  Scientists are very concerned about the potential damage the bugs could inflict on farmers’ crops this year.

There’s talk that they may import the bugs’ natural predator–the Asian Wasp.  I’m not sure if I want to see the wasp that could take on the billions of stink bugs they estimate to be here now.  So if you see an unusual bug crawling on the walls of your old house–get ready, as they may be coming.