Home / Old House Blog / Get Your Greek On

Get Your Greek On

Again, full disclosure on my part; I own a lace curtain company, and I select and sell historic lace curtains appropriate for the Victorian, Arts & Crafts and Art Deco periods. If this post appears to be self-promoting, I’m not going to deny it. But then again, I’m fulfilling a need…

I’ve been selling lace curtains to old house owners (and tenants) for over seventeen years, and one of the most frequent queries I receive is “Why aren’t there more lace curtains for Georgian, Federal and Early Victorian Houses?”

Because they didn’t exist, at least on a mass-produced level.

Machine-made lace, including curtains, was not common until later in the 19th century.  Before then, lace was hand-woven, and frightfully expensive: the concept of the middle class (or anyone who wasn’t exceptionally rich) being able to afford lace window treatments was beyond comprehension

This proves challenging to those of us Old House Folks who live in late 18th and early 19th century homes.  We’d like to hang something in the windows that gives us privacy while allowing the sunlight to enter, and we’re so bold as to ask for something stylistically compatible with our furnishings.

And let’s face it; mini-blinds in a Salt-box looks kinda goofy.

So, we peruse the lace options available, and we’re pretty much left with Late Victorian and Arts & Crafts movement patterns. (Not that there’s anything wrong with them; I sell those styles as well…)

But maybe you just wanted something more in keeping with that Empire sofa.

The area of Western Massachusetts that I live in is riddled with Greek Revival, Federal and Georgian houses; all of which are based on Classical architectural motifs, and as I drive around or visit clients, I noticed that there are a lot of blank windows or ones with lace patterns from a much later era, especially in the sidelights of the porticos. In this aesthetically critical area, folks need privacy from unwanted solicitors, and yet the want to make an impression on their wanted guests.

So, I grabbed the anthemion by the horns and said: “I’m going to make Greek Revival lace curtains and sidelights!” But what to use for inspiration? That was easy; who sells the most popular Neo-Classical wallpaper pattern? None other than Bradbury & Bradbury Art Wallpapers with their Neo-Grec Roomset.

I wrote my colleague Steve Bauer, the company’s owner (and the guy who designed so many of their legendary patterns) and asked him to come up with a pattern that was purely classical in feel, without the more Late Victorian ornamentation found on a lot of other lace patterns. I desired something ornate, but uncluttered, and he rose to the challenge admirably. When he sent me the prototype drawing, I was delighted, and after bouncing a tiny tweak or two back and forth, he produced what is now the Grecian Panel and Sidelight. 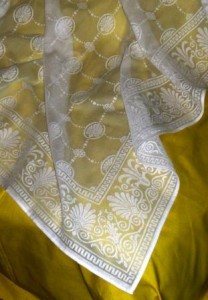 Since the loom is roughly 68” wide, I had to split that width appropriately. Most American windows are roughly 30-34” wide, and my experience has taught me that doubling the amount of lace per window is too dense, obscures the pattern, and is expensive for the customer. So I chose 47” wide for the main curtains, which left me 20”of width (after finishing) for the sidelight. The cool thing is that you can also use two sidelights in one window in case you want to part them and tie them back.

Emboldened, I asked to Steve to create a lace panel for the Aesthetic Movement/Eastlake aficionado, as they are also underserved. I wanted something with a little bit of Anglo-Japanese ornament, but it also had to have the robust angularity of the Modern Gothic Movement. Something that would work with the furniture of my idols, the Herter Brothers and Kimbel and Cabus.

I sent some rough ideas to Steve, who thankfully ignored them and came up with The Eastlake Panel; I was blown away!

An aside: when you invest in the production of a lace design, it’s not cheap, and you try to select patterns that you believe will sell. Otherwise, you’re left with a lot of long, white future wedding presents. On the other hand sometimes, you choose something you love, and hope others agree. This is the case with the Eastlake Panel; the late 1870s and early 1880s are my favorite era for decorative arts, architecture and painting, and I just felt that there had to be a lace curtain suitable for this period.

Oh yes, and just for giggles, Steve designed an Art Deco pattern, as he related that this is a very popular era for his goods. The Bradbury Collection rolled out this summer, and even with the grim economic news of the time, they’re doing quite well.

As the first prospective client responded when I sent them the photographs; “Sensational. Actually, SINsational. I feel like going out and sinning after seeing the Grecian Panels. They’re incredible!”