The Goldfield Hotel: When Ghost Stories Are Bad for Historical Properties

Sometimes, ghost stories are good for business. Last week I wrote about the Mizpah Hotel, which is one of many historic properties that have benefited from ghost tales.  Why? Because ghosts sell.

Just take a look at this list of television shows:

Ghosts are “en vogue,” said Angela Haag, researcher for the Central Nevada Museum and officer of the Goldfield Historical Society and , who pointed out that even Animal Planet has a ghost show (it’s on the list). 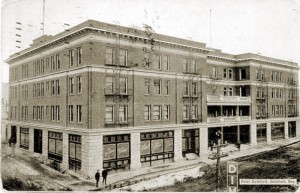 I spoke with Haag, who is actively involved in several historic preservation efforts in Goldfield, to get information on the possible basis of the ghost stories surrounding the historic Goldfield Hotel. The Goldfield Hotel is another of those fabulous historic properties that have long been empty and have changed hands again and again, with each new owner promising a brilliant historical restoration. The hotel has been closed since the 1940s, but in the last decade has captured the attention of several television shows.

But according to Haag who has researched the origins behind these ghost stories, they are typically “based on someone’s paranormal experience, not based on fact.”  The basic story goes like this: woman named Elizabeth gets pregnant and is chained by a man (well-known Nevadan George Wingfield, who did have historical ties to the hotel is sometimes that man) to a radiator in room 109. She’s given food and water until the baby is born.  In some versions, the baby is thrown down the mine shaft that’s under the hotel. Elizabeth is also killed. It’s her spirit that paranormal experts claim to interact with in room 109.

However, Haag pointed out inconsistencies. First, the time line doesn’t jibe. The time when Elizabeth, the daughter of a real hotel manager, was to have lived there, George W. had sold the hotel and was long gone. Also, Haag’s research has showed there isn’t and never was a mine shaft underneath the hotel, though there is one next to it. Also, these ghost stories never emerged into the local–or national–scene until the 1980s when Shirley Porter wrote a book But You Can’t Leave, Shirley about her purchase and attempted renovation of the Goldfield Hotel (and the ghosts therein).

There was a confirmed suicide in 1915 of hotel porter J.B. Findly, and anecdotal evidence of at least one sighting of this ghost the day after his death. Haag repeatedly receives requests from people who want access to the hotel because of the ghosts. But none of these tales have benefited Goldfield–or the hotel. “I think people get so excited because they believe–they want to see,” explained Haag. But because of the supernatural claims and television exposure, vandalism to the hotel has significantly increased. It’s been vandalized multiple times since the last investigative show aired in 2008.

Not just the hotel is targeted, but surrounding historical properties as well. Haag owns one of these properties and returned from a ten-day vacation to find the back of the building compromised and one of the boards covering a window had been unscrewed. “People think it’s a free-for-all,” Haag said, describing why someone might see an old building that isn’t being lived in and trespass and vandalize the property. Haag pointed, “Everything is owned by somebody.” And the more vandalism that occurs to these old properties, the slimmer the chances of anyone coming up with the money to restore them–ghost stories or not.