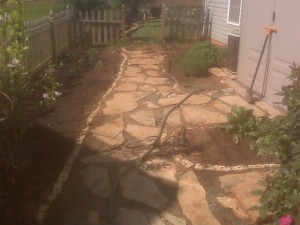 I spent the day yesterday re-setting a flagstone path through a client’s vegetable garden. My assistant, Mallory, initially wondered why we were bothering, as the existing path seemed fine to her. (In Mal’s defense, she was only a few sips into her hyper-caffeinated energy drink.) The old path had been competently laid–the stones had been set in sand, they didn’t wobble, the area between the stones was filled in with gravel. I’ve seen a lot of walkways (and fixed quite a few) that were apparently built by thoroughly wetting the ground, and then dropping stones or pavers at regular intervals into the mud. This path was much better constructed, but it didn’t quite work. It seemed to sit in the garden, as opposed to functioning as a way through the garden and, despite a clear border, still seemed haphazard.

I see–and correct–a lot of landscaping projects that have gone similarly awry not because they were a bad idea to begin with, but because they were done without a clear plan. With older houses, careful planning is particularly important, because older homes are often on odd-shaped lots, having been built before to zoning ordinances and street plans, and because any new landscaping has to blend well with existing landscaping that may be decades old.

To me, the first step in creating a plan–whether for a total landscape design or a small planting bed–is clearly defining the borders. If you take a walk through your own neighborhood and take note of which houses have the best landscaping, I bet you will find that what they all have in common is that each area–lawn, tree, flower bed–is clearly defined. In the case of the walkway, the problem was that it sat too low, and the dirt from the planting beds muddied (literally) the border lines. To fix it, we added enough sand so that the path would be a couple of inches higher when we re-set the stones, and chose a light-colored quartzite gravel to provide more contrast between the path and the garden. 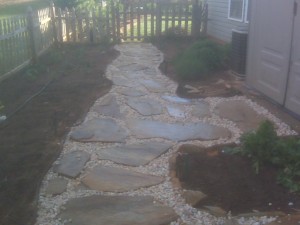 When planning, I also find it useful to actually stake out the borders before finalizing a plan. Sketches are fine, but in many cases they don’t effectively depict how something will look in space. By staking out the proposed location of a path or planting bed or new tree (stake out two circles, one depicting the circumference of the new tree, the other the circumference of the tree at full maturity), you can see if the area is too large or too small for what you want to put in, if the shape works in conjunction with what’s already there, and, particularly in the case of trees, if you would be planting too close to your home. It is also an important first step in achieving the sharp borders you want in your landscaping.