In 2005, Hurricane Katrina roared ashore, bringing devastating winds, pelting rains and a heartbreaking flood. One of the many architectural casualties of that terrible storm was Grass Lawn, an 1836 plantation home in Gulfport, MS. By the time the storm was gone, the stately Grass Lawn was gone too — all that remained was the footprint of where the house used to stand. 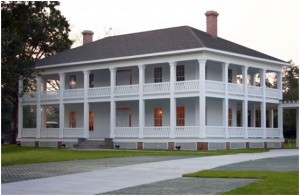 The people of Gulfport cherished the old house, which stood out as a touch of the Old South in a place where casinos and strip malls threatened to choke out the charm. With the public behind the decision, city officials decided to recreate history by rebuilding Grass Lawn exactly as it was before the storm took it away.

The challenges of recreating history

Once approval was given for rebuilding the structure, designers realized they had a difficult job on their hands. Grass Lawn was designed by the builder, which meant no architect, no blueprints and no guidance for those who wanted to rebuild it. Historical photographs of Grass Lawn were scarce, and even the plans drawn up during renovation over the years weren’t in-depth enough to provide all the clues into an accurate reproduction.

The builders started with a compromise: they would not worry about the interior issues that most people would never see, such as the pegged joints or hand-carved timber. They would instead focus on the details that make a house unique, such as moldings, porch columns and the like. There would be no stock replacement windows or doors in this place — it would instead be filled with hand-crafted details that would make the new structure look as historic as possible.

The details were assembled through careful study of photographs taken throughout the years and a visit to another home once owned by Dr. Hiram Alexander Roberts, the original owner of Grass Lawn. It was believed that the family would have brought their own builders and craftsman to construct Grass Lawn, so the work done on the primary residence could provide clues into the intricate details of the work. They also used evidence from other houses built during that time period, as well as details popular in that particular region, to piece together what Grass Lawn should look like.

Century-old photographs met modern technology when the designers turned to computer-aided drafting to recreate the dimensions of the house to within fractions of an inch. It was a scavenger hunt of sorts; for instance, in order to figure out the dimensions of a particular molding, they had to first figure out the exact dimensions of the door. Even the width of the decorations on the outdoor railings had to be measured precisely to ensure that it looked the same all the way around the house.

Once the plans were done, the work began. But even a carefully-orchestrated rebuilding had a few hiccups, such as the cupping of hardwood flooring on the porch. One of the tough lessons learned was the difficulty in getting a true bid for the work, as using low bids didn’t always translate into getting the best specialized construction.

Today Grass Lawn stands not only as a symbol of Gulfport’s history, but as a reminder of what has been overcome. The historic home is expected to reopen soon to accommodate many more years of weddings, tours and other events that make the house an integral part of the community.