Some old houses can be preserved just as they are, with some upgrades and changes to make the home more energy-efficient and convenient. It’s wonderful when a home can be upgraded in a way that doesn’t change the look or architectural details, but still brings the home up-to-date with more modern standards of energy-efficiency. But there are other houses, such as the Old Quincy House on Harvard’s campus, that have to be changed in significant ways in order to keep pace with the new needs of the property. 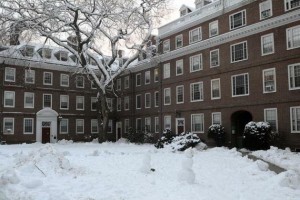 The original house was built in 1929 and 1930, the first of the “New Harvard” houses built after the original seven. It had classic details that were popular during the era, including high ceilings, carved moldings, plenty of fireplaces and fine details throughout each suite. Work on the building since the initial construction has gradually made the rooms more modern, but the renovation planned for 2012 will change the interior historical details of Quincy House in a very big way. The outside of the house will be preserved, as will the staircases; however, everything else will change.

Some of the biggest changes will include elevators, handicap-accessible rooms and larger personal areas. The rooms will be changed from the more traditional three-or-four per space to single or double bedrooms. A house built for 103 students, there are now 170 residing there, and the intention is to create a more comfortable space for all 179. The house will also get a much-needed update in energy-efficiency with new insulation in the walls, as well as new windows and doors. The goal is to reach the Leadership in Energy and Environmental Design (LEED) Gold Certification.

The building will serve as a test project, the first of 12 on campus to get a serious overhaul. In a press release announcing the plans, Dean Michael D. Smith said the college wanted to preserve the historical character and culture of Quincy House while renewing the use of the house for the 21st century. If all goes well, other neo-Georgian homes on the campus will be next in line for renovation.

Harvard is known for its love of tradition, so a significant renovation on the storied campus is a bit difficult to wrap my mind around. However, the clear effort to keep the facade of the original house will go a long way toward preserving the look of the entire campus. Other additions that would be welcome, though are not included in the renovation plans, would be the addition of solar panels on the roof, as well as more efficient water heaters to serve the residents. The house is currently heated with hot water radiators and has a significant energy-reduction plan in place, which will apparently stay in effect after the renovation is complete.

It’s not the first change that Quincy House has seen, though. One of the earliest changes was the name of the house, which was originally “Mather.” Time marches on–but at least the exterior of the venerable Quincy House will still retain its original character.