This late 17th century colonial home is located in what was William Penn’s Colony of Pennsylvania.  Penn’s “Holy Experiment” was where the Society of Friends (Quakers) and some other religious dissenters of Western Europe, could establish their homes, worship centers and government, free from religious intolerance.

Twenty year old Thomas Massey arrived in the colony in 1683 as an indentured servant.  He, with several other “servants” sailed from England with Francis Standfield, a wealthy Quaker land purchaser, who paid for their passage.  After serving for the approximate 5-7 years, Standfield was required to give his servants some clothes, tools, wheat and corn, along with 50 acres of his land.  This was then matched by 50 acres granted from the colony’s proprietor, William Penn.  Massey quickly established his own farm, got married and purchased 200 more acres from his old “master’s” son, James Standfield. 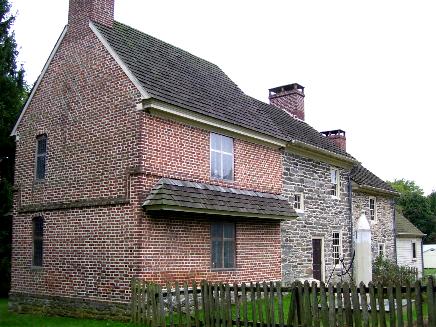 The oldest section of the Massey home is built of  brick, 2 wythes thick.  The front and rear walls are laid in the English bond pattern and the gable end laid in the Flemish bond.  The dark “headers” are the over-fired bricks, being closest to the heat in the kiln.  These darker bricks were also used to create a diamond,  patterned from 4 diamonds, in the gable.  This brick section, built in 1696, is actually an addition to the original home, that was built of logs.  This fine early brick structure is an indication of not only a growing family but also a prosperous farm.  The pent roofs, a once common but forgotten colonial house detail, were recreated at both the front and rear.  The extreme slope of the roof and the narrow casement windows complete the 17th century appearance of the oldest remaining section of the home. In the early 1730s the original log section was removed and replaced with a stone structure by Thomas’ eldest son Mordecai, who inherited the farm.  Subsequent additions created the “telescoping” farmhouse, a common style when originating from an early colonial English home in southeastern Pennsylvania. 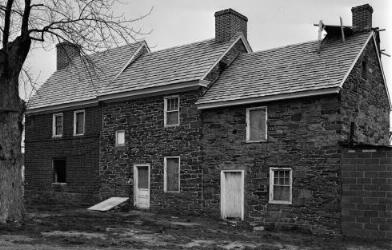 By the 1960s, Philadelphia’s western suburbs were heavily developed and the Thomas Massey house was under threat of demolition. In 1964 the home and one acre of the original farm was purchased by a Massey descendant, Lawrence Smith.  He then gave it to the Township to be preserved.  Ten years later, the home was faithfully restored.  Staffed by volunteers, the house is furnished and open to the public for some special events, like colonial dinners and a harvest festival.  It is also open for tours each Sunday from May through October, except holiday weekends.