It’s been a while since I’ve had time to catch up on the goings on in the world of historic preservation. After spending a few hours doing just that this evening, I’m pleased to announce that preservation of historic homes and structures is still alive and well — a pleasant surprise considering all the uncertainty that still exists with the economy. Many people and organizations continue to work diligently in an effort to preserve our nation’s heritage. While preservation groups are active across the country, perhaps the busiest are those in the history-rich New England area. 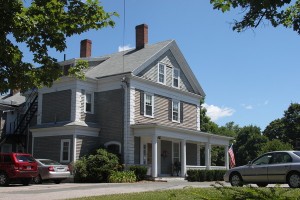 The Orchard House in Watertown, MA

I’ve always been fascinated by the unique styling of New England Connected Farm Houses as they just seem to make so much sense — especially in a region known for its harsh winters. While growing up, one of my chores was lugging buckets of hot water down to our horse stable whenever temperatures dropped below freezing. It didn’t take many slips on icy paths before I realized that those early New England home builders had the right idea. A connected farmhouse has the barn attached to the home — usually at the kitchen.

According to an article on the Watertown Patch, the Orchard House in Watertown may be the only remaining example of a connected farm house still on its original orchard property. The land it sits on was once owned by Captain Stearn, a Revolutionary War hero who participated in the Boston Tea Party. Captain Stern passed the land on to his nephew and the Orchard House was constructed in 1832. The original owners of the home were active in the movement to abolish slavery.

The Orchard House, which has been unused since 2006, now sits on land owned by a high school that needs additional classrooms and a gym. It appears to be the same old story: a historical house that is standing in the way of progress. The school submitted a request to tear down the house so temporary classrooms (trailers) could be installed and additional green space could be created.

Fortunately, the Watertown Historical Commission stepped in and got a six month stay of execution for the Orchard House. It may be possible for it to be extended to as long as 12 months and it sounds like the school is working with rather than against the Commission. 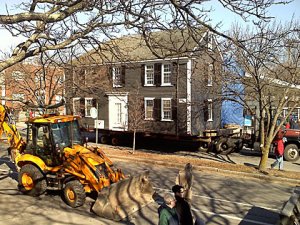 Watertown isn’t the only community in New England with an active historic preservation organization. The Belmont Historical Commission near Boston recently helped save a 252 year old house by spearheading the efforts to get it moved to another lot in town. Evidently the land it was on was needed to construct a bank — I can’t speak for the area around Boston, but in my neck of the woods it seems like you can’t drive a mile without seeing an empty bank building. I’m glad they were able to save the old house.