What would have been here?

Is your sidewalk the same age as your house? If you own a home that pre-dates the Civil War, probably not. According to primary documents from the early nineteenth century, it looks like the most common material for sidewalks in America was mud. In other words, there’s much more written in the form of complaints about unpaved walks than descriptions of hard surfaces.

There’s also very little physical evidence remaining of early walks. Materials eventually deteriorate and get replaced. Installation of modern, in-ground utilities can destroy early hardscapes. At the end of the 19th century, concrete was found to be ideal for paving. It was a lower cost material so it was common to use for replacement of original surfaces. 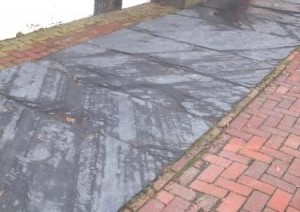 The Earliest Paving
From what I can gather, it seems that creating paved surfaces for foot traffic preceded the paving of roads. The earliest demand for dry walks seems to be in urbanized areas. Wood seems to have been the most common paving in the 18th and early 19th century. I’ve seen drawings and prints showing what can only be rough-cut boards installed between dirt roads and more formal homes. They’re laid both end-to-end and edge-to-edge, with the latter appearing in more formal or urban areas. What we see in the movie westerns is probably pretty close.

There are some other materials that were used to create pedestrian-friendly paths that weren’t impervious. In some areas, archaeological evidence suggests the use of small, aggregate-like sand, gravel, small river pebbles, and even oyster shells. This, of course, is limited by what resources were available locally.

Brick
Brick was also used for sidewalks throughout the 18th and 19th centuries. Some have stated that it was limited to east coast colonial cities and upscale neighborhoods. There may be some truth to that for the 18th century, but there is plenty of documentation that it was used in towns and cities across the country in the 19th century.

Most original hand-made brick walks haven’t survived beyond 200 years. This is partly due to changes I’ve described above as well as to a glazed surface that can erode quickly. Brick is the most common material chosen for sidewalks when there have been preservation efforts in historic districts.

Stone
Cobblestone seems to have been readily available to many cities. Many people think it’s only suitable for streets and not for regular foot traffic. I’ve viewed many photographs from the late 19th century that show many American cities used it for paving walks as well.

Sandstone was also used for sidewalks, but it seems to be limited to mostly larger cities and very expensive late Victorian era homes. Limestone and granite can also be found in some rare instances.

In my area, not far from the PA slate belt, a few towns used large slabs of slate. Unfortunately, not only do changes occur, tree roots mature and lift the slabs, resulting in their replacement to reduce liability. Most of the remaining sections of slate walks will likely disappear in my lifetime.

The design of the new “old” sidewalk should incorporate features that make it quite durable to your region’s environment, should be accessible, and should be safe for all intended traffic (the original pedestrians on those historic sidewalks probably didn’t wear those spiky-heal shoes and in-line skates). I also think it’s important to select a material that’s a compliment, not a distraction, to the historic character of your home.