History in harmony at the Governor Hotel

In addition to being a huge fan of architecture and old houses, I have a serious weakness for old-fashioned television shows where the underdog always wins. After getting hooked on a few seasons of Leverage on TNT, I started to notice that occasional scenes were filmed in a very nice hotel, one that had more than a few historic features. Was this a real place or just a very clever set? 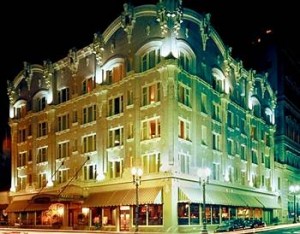 After a few minutes of surfing message boards, I was reminded that yes, you can find anything on the Internet. That includes the history of the Governor Hotel in Portland, OR.

The history of a hotel

Originally known as the Seward Hotel, the swank downtown hotel opened in 1909 to fanfare and accolades. During that time, guests paid between $1.50 and $2.00 for a room that included luxurious and edgy designs for the time, including stained glass, terracotta and fine handcrafted details.

On the other side of the block, an entirely different but no less respected establishment was taking shape. In 1923, the Portland Elks Lodge was built. The Lodge was built in the style of the Farnese Palace in Rome, which was largely created by Michelangelo. The very classic look included coffered ceilings, inlaid marble and frescoes.

During the Depression, the Elks Lodge lost their Portland building. Over time, the majestic space underwent some serious changes, including the construction of an office building inside the structure. Fortunately, the architect who created the interior office building kept the original walls intact. That turned into a very significant choice years later, when the owner of the hotel saw those walls and realized there was great potential there. Though the buildings had been joined in the 1980s, they were not seamlessly integrated until much later. In 2004, the former Elks Lodge became the new entrance of the Governor Hotel. 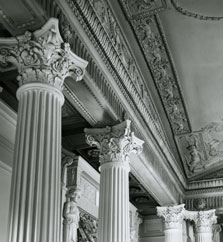 Architect Barry Smith led the 2003 renovation, which posed a significant challenge: how to update the building for today’s modern hotel yet keep all of the historical features intact? The job was wide-reaching and included everything from hiding modern lights in old-fashioned ceilings to installing stained glass that had been removed years prior. Through the use of old photographs, dismantling layers of wood and carpet and doing plenty of old-fashioned research into the nooks and crannies of the hotel, the renovation team reclaimed the 1909 grandeur of the Seward Hotel. Contractors worked tirelessly to restore, renovate and improve every part of the building, including a few spaces that had never before been opened to the public.

One of the most interesting parts of the hotel is a mystery that hangs right out in the open–tall figures that look more like robots than gargoyles grace the top of the building and appear to be looking down at passersby. These figures are completely out of place with the architecture of the building, yet make for a lively conversation piece from a hotel that already gives guests plenty of things to talk about. 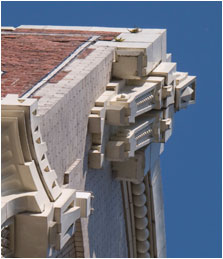 One of the "Robots." Image credit: Governor Hotel

Being featured as a set on Leverage is just the latest claim to fame for this hotel, which has seen a great deal of movie-making magic within those historic walls. Now on the National Register and listed as one of the top hotels in the world by Travel and Leisure Magazine, the Governor Hotel is proof that a multitude of styles, details and histories can weave together to form one truly beautiful work of art.