This past weekend I went on the Society for Clinton Hill’s 32nd anniversary historic house tour. I moved to this area of Brooklyn, NY, about a year ago and have been fascinated by the unique history, and the truly diverse current architectural, socioeconomic and ethnic make-up of the area. In a four or five block radius you’ll find old brick factory buildings (like the one I live in), brownstones, limestones, projects (I guess the PC term is public housing?), clapboard rowhouses, mansions, Italianate town houses, antebellum frame houses, carriage houses and more. The residents are rich, poor and middle class, and often living on the same block. The ethnic make-up is mostly black then Hispanic, white, and Asian.

The house tour included 13 different buildings. A few beautiful old churches, a brewery and various dwellings. I was especially drawn to one of the mansions. The Charles Pratt Mansion, to be specific. 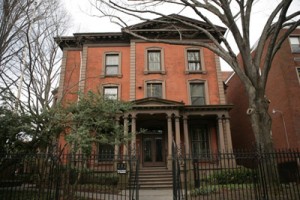 Charles Pratt was born in 1830, one of 11 children. He scraped up a bit of money and went to college, intermittently, I believe. It’s said that he lived on a dollar a week at times. I checked an online inflation calculator which tells me that’s equivalent to about $23.70 today. Pretty thrifty! He started off working in Boston for a company that dealt in paints and whale oil products. He then moved to New York and worked for a similar company that also dealt in astral oil. When the company split, Pratt kept the oil business. He merged with John D. Rockefeller’s Standard Oil in 1874 and became filthy rich. At the time of his death, in 1891, he was the richest man in Brooklyn. 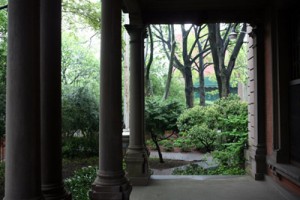 In the early 1870s Clinton Avenue in Clinton Hill was a quiet suburban street lined with wood villas. All that changed with the construction of the Charles Pratt Mansion at 232 Clinton. Pratt then built three more mansions on the block, 229, 241, and 245. He gave them to his sons as wedding gifts. I wonder if he threw in a set of stainless steel cookware…

But Pratt’s generosity wasn’t limited to building mansions for his children (and he had many, 2 by his first wife, and 6 by his second, who incidentally was the sister of his first wife. He married her 2 years after the death of wife #1), he also cared for and supported his community in big, important ways. He was known as one of the area’s greatest philanthropists. He established and endowed the Pratt Institute, an art and design school, in 1887 and funded many other community programs around education and housing.

Pratt’s presence attracted many wealthy industrialists and financiers to the ‘hood. Before long new residents included the Bristols (of the Bristol-Myers company) and the Underwoods (of typewriter fame). Clinton Avenue became known as Brooklyn’s gold coast. 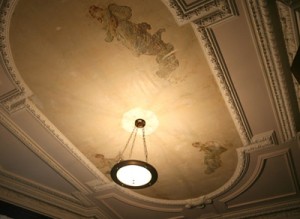 You get the stairs, I get the elevator

The massive Italianate/neo-Greco villa is now being used as a convent. Twelve nuns live on the upper levels (unfortunately, that area was off limits during the tour), and the main floor library was converted into a chapel. The most interesting bit of the building’s history, to me, was the story of the feuding brothers. Pratt Sr. eventually gave the Pratt Mansion to two of his six sons to share, and apparently these sons did not get along. In fact, at one point their displeasure with one another was so great that one of the brothers installed an elevator — one of the first in Brooklyn, built by the Otis elevator company — so that he and his family would not have to run into his brother and his brother’s family on the stairwell.

I wonder what the sisters who inhabit the Pratt Mansion now think about this funny bit of history.

Previously in this blog, Bill Kibbel wrote about Spite Houses, and some readers mentioned spite fences and spite driveways. I wonder, could this be considered a spite elevator?