Is that old house really haunted?

Shortly after moving into my first fixer-upper old house, my daughter came into my bedroom in the middle of the night, blanket clutched in her fist, eyes wide as saucers. “There’s a woman in my room!” she whispered.

Of course there wasn’t. She had listened to ghost stories before bed, told by the elderly neighbor who had lived next to our house for decades. I have to admit that I listened quite intently too, because the story was about the old woman who had once lived in our house. Rumor had it the woman went crazy upon the disappearance of her only son and even after she passed away, she kept coming back to the house to search for him. The rumor was given life by the sightings: those who had lived in or visited our house claimed to have seen her.

After a few nights of being certain someone was watching her sleep, my daughter came to a sweet solution: the house was haunted. But the lady wasn’t a bad ghost. She was simply trying to find her son, and in the meantime she was looking after the kids that were in the house. The ghost was looking after her.

Creepy is easy in an old house 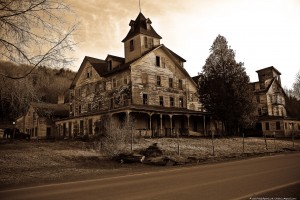 Whether you believe in ghosts or not, one thing is certain: an old house has so many little quirks and creaks that the thought of ghosts definitely messes with your head.

With Halloween coming up and all the talk of haunted houses, it occurred to me that a new house is very rarely considered haunted. Maybe that’s because the tight frames never leave that mysterious cold spot in the center of a room, or maybe it’s because laminate flooring rarely sounds like old, worn pine. Even the lighting is different–the sunlight glowing through replacement windows just doesn’t look the same as the sunlight flowing through those single-panes.

Besides, the older a house is, the more vibrant our imagination can get. It isn’t difficult to imagine the things that might have happened in a house that is only ten years old. But a house that is 100 years old could have seen several generations of owners, good times and bad, sweet moments and yes, the occasional tragedy. Walking through an old house always leads to the question, “I wonder what happened here?”

Old houses feed that question because they make it very easy to believe in ghosts. The old wood flooring creaks and groans as it shifts, and that can make anyone think there is something walking through the house–but when you go to look, no one is there. The wind blowing down through the chimney or around those cracks in the walls can sounds like moans and groans of tortured souls. Sometimes lights come on by themselves. Is that thanks to old wiring on the fritz, or something else going on?

Old window frames can pop and snap, especially early in the evening and in the wintertime, when the sunlight warming the old wood shakes things up. The radiators make that ticking sound that can sound sinister when heard from a room down the hall. There is even the occasional “oh my goodness what was that” shuffling noise in the attic, which seems to mysteriously disappear the moment the attic door is opened.

Now that I think about it, that one might actually be a ghost.