Home / Old House Blog / Is There Hidden Treasure in Your Old Home?

Is There Hidden Treasure in Your Old Home?

I think everyone has heard stories about the new owner of an old house doing renovations and discovering a huge stash of Great Depression-era cash hidden in the walls or under the stairs. While many of these stories are no doubt urban legends, some of them are true, but if you’re suddenly feeling tempted to start rapping your knuckles along your plaster walls looking for a hidden hollow, don’t bother. Such discoveries are sometimes made–but by other people.

But even if there’s no cache of cash hidden in your floorboards, there might yet be some hidden treasure in your home. When I was growing up my family struck gold (so to speak) twice. The first time was soon after we moved into a house in St. Louis that had been built in the 1920s and (if memory serves), had been owned by a single family, being passed from the original owners to their unmarried daughter, who continued to live there well into her golden years. The homes on the street were distinct but similar, having been designed by the same architect. All were red brick, all had front doors featuring bevelled glass, and all had second story porches both in front and in back that went utterly unused because their tar-covered floors made them unbearably hot, even on relatively cool days. They also all had matching stained-glass windows on either side of the living room fireplace.  All except for our house, that is. Or so we thought. Several months after we’d moved in my moved in my mother wondered aloud to a visiting neighbor why ours was the only house without stained-glass windows.

“Your house has stained-glass windows,” he answered.

An awkward silence ensued, as we were standing in the living room, and the only thing to either side of our fireplace was solid wall. Or, again, so we thought.

“My kitchen window looks out on your house,” the neighbor said. “I can see them whenever I do dishes. You have beautiful stained glass windows.”

We went outside, around the house and, sure enough, there they were. For whatever reason the previous owner had had them plastered over inside (possibly, we speculated, because they clashed with the searingly bright turquoose paint that had covered all the walls in the house until we repainted prior to moving in). Once uncovered, the windows added considerable character and beauty to the room. 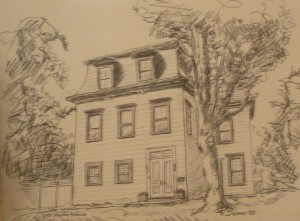 My house in Connecticut

Some years later we moved to Stamford, Connecticut, this time to a house built in the 1830s. Once again we found hidden treasure near the fireplaces. Our contractor had brought his father over to see if he could repair the cracked plaster molding in the living room. Indeed he could, but what interested him wasn’t the molding but the mantle, which was a hideous thing covered with many layers of paint. The old gentleman kept going back to mantle, prodding at it with his pocketknife. Finally he spoke to his son, in Italian, who translated: “Dad thinks this mantle is made of slate. He wants to know if you’ll let him dismantle it and take it home so he can clean it up.”

In fact, the house contained four slate mantles, and all of them were exquisitely etched and remarkably beautiful, the product of craftsmanship that no longer exists. Frankly, the skill with which the contractor’s father restored the mantles is probably also lost, and while I’m sure he was paid for his work, I’m equally certain that he was chiefly motivated in uncovering relics of a bygone artisan era. I also believe that many old houses contain similar workmanship that, for whatever reasons, lies covered, awaiting rediscovery.