Lessons in blending history and energy-efficiency

Anyone who follows Matt Grocoff and his old house adventures knows that energy-efficiency and old houses can be a beautiful mix. Homeowners across the country are catching on to the fact that green doesn’t necessarily equal ultra-modern, and that even the smallest changes in an old house can make a big difference.

However, when price is not really an option, there are even more upgrades you can make while restoring your old house to its rightful glory. When Julie Tung and Ed Schwartz decided to find a home in Ridgewood, New Jersey, their two passions had to meet: she wanted a historic home to restore, and he wanted a home he could make energy-efficient. They settled on a 5,000 square foot house built in 1767 that was at risk of being torn down. 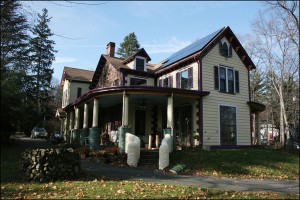 From basic problems to modern ideas

The work started from the ground up–literally. Part of the foundation was missing, making the home unstable. Other surprises included those common to old houses, such as lead pipes, asbestos, ancient wiring, unusable chimneys and mold lurking in the basement. What was meant to be a project of a few years began in 2006 and was only recently completed.

Schwartz pointed out that approaching the job one step at a time was the best way to go–and that hiring a good contractor was a key to success. “Old houses have a lot of nuances, and a contractor who doesn’t understand them can do more harm than good,” he told NewJersey.com. In their case, a seasoned contractor was able to help them save as much of the original wood flooring as possible. The addition of cork floors in the foyer and kitchen proves that modern materials can fit in perfectly with an old house and be even more environmentally-friendly than traditional wood.

The original windows from the 1860’s reside in harmony with the solar panels on the roof. Rather than sacrifice the windows for energy-efficient replacement windows, the couple chose to instead heavily insulate the walls and looked to inexpensive fixes, such as weather-stripping and caulk, to keep the original look. Schwartz pointed out that many renovations rip out the windows first, but that it doesn’t make much sense, since windows are only about 20 percent of the wall area. “You want to tackle the 80 percent–insulating the walls–before you go after the 20 percent that’s windows,” Schwartz said.

Tricks of the trade that save money

Though several hundred thousand was put into the work, there are lessons homeowners on tighter budgets can take away from the home Schwartz and Tung restored. Keeping all the elements of the home you possibly can, using reclaimed wood where appropriate and holding out for discount items are all mainstays of the budget-friendly restoration. For things that must be replaced, a salvage yard can be your wallet’s best friend. Consider using second-hand appliances, doing much of the small detail work yourself and always hire a good contractor for the big projects–remember, if it is done right the first time, that saves you money in the long run.