Levittown: The Houses that Spawned a Community

Communities usually start with families. One family builds a home on a piece of land and moves into it, then within a short period of time, another home pops up nearby. Soon there is development happening everywhere, and those first residents sit back and watch as their little community grows by leaps and bounds.

In the case of Levittown, it was the houses themselves that launched the community.

The year was 1945. World War II was ending, and at the same time, residents in the tiny farming town of Island Trees, New York were selling off their property as fast as they could. The golden nematode had decimated the valuable potato crops, making the land useless. 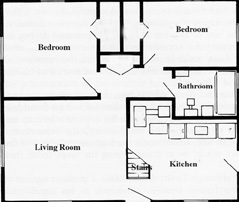 The floorplan for an original Levitt house. Image Credit: University of Illinois at Chicago

Bill Levitt, one of the sons in building firm Levitt and Sons, was finishing up his Navy service. Seeing a unique opportunity, Levitt talked his father into buying up the old potato farms, dividing them into tracts and building cheap yet sturdy homes for the returning soldiers. The GI Loans offered to the servicemen would make these homes an affordable option. The homes would also have a very simple floor plan that would allow the owners to easily build onto the home in future years.

The mere promise of affordable homes was a success. On May 7, 1947, Levitt and Sons made a public announcement of their intent to build 2,000 homes for returning soldiers. Two days later, 1,000 of those homes had been rented. The homes were yet to be built, but the soldiers needed housing right then.

The solution? The first mass-produced homes in America.

The homes were built on a concrete slab foundation, forgoing the basement that was so common in homes of that time period. All of the lumber was pre-cut and shipped to the site. Brochures from that time period show walls, stairs and other elements of the homes already assembled and waiting to be put into place, making Levitt homes one of the first examples of the modular construction technique. In fact, these techniques were so successful that soon, the company was building 30 homes every day.

In the end, over 17,000 Levitt homes were built. The community had its own schools, shopping centers and post office. In honor of the astounding accomplishments, the new town dropped the Island Trees name and became known as Levittown.

Today, most of the Levittown homes have changed from their original look, thanks to remodeling that added more rooms, changes to the exterior and sometimes significant changes to the surrounding area, such as homeowners who bought neighboring property in order to tear down the original house and expand their own homes. However, the homes are such a part of American history that the Smithsonian has long been on the prowl for a homeowner willing to donate their original Levittown house for exhibit display.

Though it is common to see the forerunners of today’s more modern homes–for example, a look at a Frank Lloyd Wright “Prairie” house has the first elements of a modern open floor plan–it is rare to see a particular house and construction style change the way the world lives. Today’s rapid construction techniques for modular homes and subdivisions began with the need for quick and affordable housing, and Levitt and Sons found the solution that influenced the history of our communities. 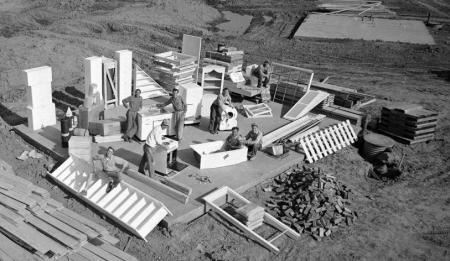 A photograph from Levitt and Sons brochure. Image Credit: University of Illinois at Chicago