Have you ever spent a lot of time searching for something only to find out it was right in front of you the entire time? Perhaps it only happens to me, but that’s the way I felt today when I was contemplating ideas for this post. I’ve been writing about old houses and historic preservation for well over a year now and just realized that I’ve never mentioned one of the most successful examples of preservation in my area. 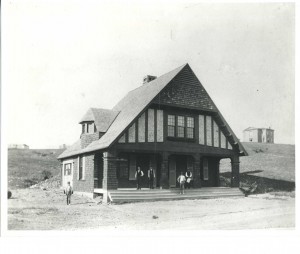 Stevens Cottage in the Early Days--photo from Town of Shenandoah

I live in the small town of Shenandoah, Va., which is named after the river it sits next to. The town was first established around 1838 and went through an initial expansion during the Civil War when local iron works and gun powder manufacturers supplied the Confederate Army. After the war the town was nicknamed “Pittsburgh of the South” because of the iron works. It became a major railroad hub due to being halfway between Harrisburg, Pa. and Roanoke, Va. During the boom years of the late 1800s the Shenandoah Land & Improvement Company was formed, and they prepared for another major expansion of the community. New streets were surveyed, lots were sold and an architect from Washington, D.C. was hired to design their new office, a hotel for the anticipated visitors, and a passenger terminal for the railroad. Unfortunately, the boom was short lived for the town’s new businesses. The hotel burnt down and the terminal was never built, but the office building still stands and is now on the Virginia and National Register of Historic Places.

The Shenandoah Land & Improvement Company folded not long after the building was completed in 1891, and the cottage became home to a private school and local newspaper until 1902 when it was purchased by the two Stevens sisters, Mary and Edna. They lived in the cottage the rest of their lives, and in 1974 it was purchased by the Shenandoah Heritage Center. The old house–now known as Stevens Cottage–underwent some restoration work and is open for public touring on occasion. Some of the furniture on display has been around since the cottage was new, and a lot of railroad antiques and other important items from the town’s history can be seen. An old caboose in very good condition next to the cottage celebrates the town’s railroad heritage. 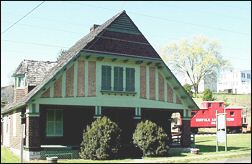 The application for historic designation makes for some interesting reading and the photo of the newly completed cottage is pretty amazing to anyone who knows the area as it appears now. The cottage and the rear of the school in the distance look about the same, but all of the fields are full of old houses that have now probably been around 75 to 100 years. I haven’t toured the Stevens Cottage in about 15 years. I definitely need to make time for another visit.