Montpelier: A lesson in historic sleuthing

In 1901, members of the duPont family had big plans for their home in Virginia. The 1760 Federal was already impressive, but they wanted something a bit more. So they added another floor on each wing of the home, almost tripling it in size. They reworked the interior to make it more modern. Finally, they chose to cover the brick facade with stucco, a very progressive move at the time. The old Federal mansion was now an even larger mansion, but just as attractive as the original. 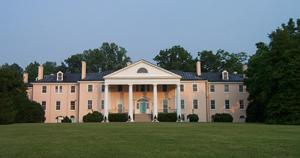 Before the restoration. Courtesy of The Montpelier Foundation.

The problem? This historic home was once the residence of former president James Madison and his wife, Dolley.

Fortunately, the duPont family was well aware of the history of the place. Marion duPont Scott, the last surviving member of the family to live in the house, bequeathed it to the National Trust for Historic Preservation and asked that the home be restored to the Madison-era look. This threw the Montpelier Foundation into a quandry, because by that point, the duPont home was a historic building in its own right. Rather than jump right into a restoration, the Foundation decided to change the duPont house only if there was clear, hard evidence of what the Madison house actually looked like.

The careful restoration work of Montpelier went above and beyond what most historic homes will ever see. The team began by lifting the hardwood floors, pulling away layers of paint and opening up over 300 holes in the house, each between one and four square feet. These holes allowed them to see past the modern facade and into the structure of the home, sometimes with the help of small cameras dropped into the space. They discovered old hardware, window cornices and chair rails.

The paper trail on the house became clear with historical documents. Everything from an insurance survey to accounts written by Confederate soldiers helped to rebuild the home’s history. There were “ghosts” around the house that helped, too. These appeared in the form of imprints left under layers of paint, markings of original cornices on old brick and even furring strips that revealed the exact rise and run of the original staircase.

Some finds were sheer luck. Bits of wallpaper were found in rat’s nests. A photograph that happened to capture a mirror led to an understanding of the way a particular door opened into the house. The look of the  original roof became clear with a single wood shingle found in the attic.

Once those clues were discovered, it was time to give restoration the green light.

The restoration was significant in scope. It involved demolishing the newer part of the home, which was built in 1901, to find the original profile of the house. The interior was reworked to include the original staircase, chair rails, sidelights and other touches that hadn’t seen the light of day in over a century. Over 30,000 hand-cut shingles created the new roof. Careful research found that 38 of the 51 original doors in the house has been repurposed; those doors were restored to their original locations.

The result? A $25 million restoration was unveiled in 2008. Today, Montpelier is the home that James and Dolley Madison enjoyed, and it’s open for visitors. See the Montpelier Foundation for more.