Typically, when folks love old houses they also tend to love other old structures–churches in particular. Here on OldHouseWeb.com,  we even have stories of one old house enthusiast who used her renovating skills to actually restore a church. And Bill Kibbel, a bona fide old house expert and regular contributor to OHW, has written about converting an old church into a residence. Even the forums chat up old churches. 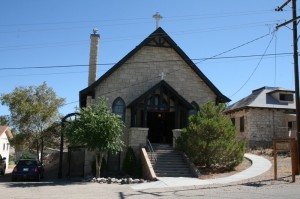 If you’ve ever had the chance to travel to Europe or watched enough travel channel shows from the region, you have probably seen more than your fair share of really beautiful old churches. Those churches and cathedrals definitely put into perspective what we call “old” here in the United States. On the east coast, of course, “old” is older than here on the west coast.

With the current economy though and, as Bill pointed out, the dwindling church membership, our old churches may be in danger. As many readers know, I moved to a teeny town in the middle of nowhere in Nevada, back to the place where I grew up. I happened to be raised Episcopalian so it really wasn’t until I got a best friend in the sixth grade that I attended a church other than the Episcopal church, which is part of the reason why I never knew just how beautiful St. Marks Church in Tonopah really is.

Photo, 1909, courtesy of the the Central Nevada Historical Society in Tonopah, Nevada, home of the "Best Museum in Rural Nevada, 2010"

Built in 1907, St. Marks is a creamy-colored stone building built by a local stone mason named E.E. Burdick.  The architect, G.B. Lyons, blended Victorian and Gothic features together in what resulted in a breath-taking church. The front entryway is a Gothic arch, as are the windows (the windows in front have stone sills and “radiating voussoirs”). The church is 40-feet high and also has a basement. It’s changed very little in the past hundred-plus years, in part because the Episcopal Diocese has owned it the whole time. A timber framework was put up on the west side of the building for a church bell. In the early 1980s the church had then-local artist and high school art teacher Francis Clark create stained glass windows to replace the original windows in the church. 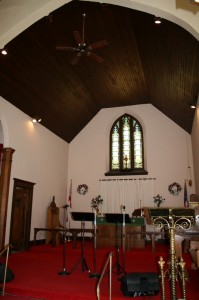 The basement is one of those neglected rooms in this “House of God.” When the church was first constructed, the basement was used as a meeting place for the Ladies Guild of Tonopah. When I was little, this is where I attended Sunday school. As I remember, there wasn’t a bathroom or even a sink.  It was just a single room where tables and chairs were set up with craft supplies and cookies. Now, the basement is used for storage. In the early 80s, the church brought in a very unattractive modular unit and slapped in the parking lot to serve as a meeting and refreshment hall. It, after all, has a bathroom.

Even though the parish at St. Marks is still less than 10 people (about the same as it was when I attended), the church is still opened and is still beautifully maintained. Why? It adapted. A community church also uses this gorgeous space for their worship and anyone can be married in the church. But that’s what churches do, just like we all do when we want to preserve old things, even when times are tough: we adapt.