Home / Old House Blog / Adding On To An Old House

Adding On To An Old House

You won’t find a “family room” or master bedroom suite in the original part of an historic home.  In my experience, the original part of most old homes just covered the basics.  Of course some Victorian era and later mansions have many extra rooms for special functions.  I occasionally inspect homes that have a grand ballroom and one even had a theater with an orchestra pit.

I also inspect many old homes that have already have an addition or two…or seven.  A large majority of the additions detract, diminish or conflict  with the original building’s historic character.   Until recent times, it was common practice to update the original part of the home with elements of the period of the addition.  Sometimes additions almost completely encapsulate the original structure.  It’s not unusual for me to discover a small portion of a large home predates what anyone figured to be the age of  the existing structure.

If considering an addition, I think it’s important to consider something that will have the least impact on the historic character of a home.

Moving Up
Adding another level to an historic building will almost always significantly change the look and proportions of a building.  If there’s no other alternative, consider the added story be “set back” from the original facade, to clearly define it as a later addition.  If you can gain the needed space by finishing the attic, this could be the best choice.  Adding some window dormers, that match the period style, could bring in light, ventilation and the required emergency escape and rescue openings.

Extending out will at least obstruct one wall of the original home.  In my area, many historic farmhouses have addition after addition added on to each end, resulting in a “telescope” appearance. 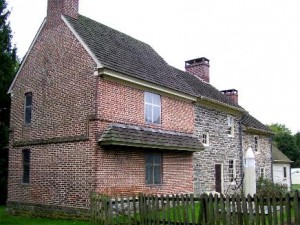 I think it works best that the addition be slightly lower than the original home.  New additions that tower above always look silly.

My preference has always been to add a rear “wing”, where possible.  This creates a “T” shaped structure, if the original home is a rectangle.

Must Fit
For an addition to not detract from the original historic home I feel it’s best to make a clear definition between old and new.  This can be accomplished by  simply using a different texture for the exterior wall covering.  An example is an addition with horizontal wood siding attached to a stone or brick home.  If done with similar craftsmanship, incorporating some details of the original into the addition can work well.  For example, matching the roof style and slope,  window style and dimensions or other correlative details can integrate the old and new but still keep them distinguishable.

I also feel it’s important to choose a style and design that not only “fits” an historic home, but complements it as well.

Here’s an example of what NOT to do: