Old House Bits and Pieces and Lots of Paint Chips

I mentioned that I’m getting ready to paint my old house. I consider myself to be an above average painter; I have painted a lot over the years and really enjoy the transformation that takes place when I spend several hours in a room with a few gallons of paint and a brush or roller. However, I’ve never tackled prepping and repainting over the many layers of paint on the exterior of an old house before, and I can now tell you that any horror story you might have heard about painting the outside of an old house was probably true. 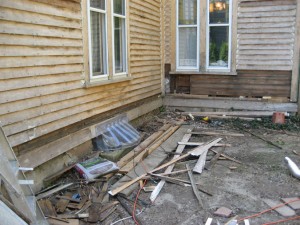 The Joys of Paint Prep photo from ourvictorianhouse.com

One thing I’m trying to avoid is the appearance that some old houses display with sections of the old paint  plainly visible under the new paint and the end result looking like a topographical map of past projects. Unfortunately, this means removing most of the old paint which I was hoping a pressure washer might do; but it has its limitations. The pressure washer removes the loose and flaking paint, but the thick caked on paint doesn’t budge. I’m afraid a more powerful washer would damage the wood.

Never one to shy away from a challenge, I broke out the big guns. I’m a tool junkie; Tim Taylor from “Home Improvement” had nothing on me and I attacked the siding with belt sanders, palm sanders, angle grinders and paint scrapers–and I seem to be winning the battle. The only problem is that at the rate I’m going, we may be celebrating Preservation Month 2011 before I have my house painted. It could be time to try a new tool (I’ll use any excuse); a Porter Cable tool and the Paint Shaver are designed specifically for removing old paint from clapboard siding. I have some Porter Cable tools and know they’re good. I’ll post updates as they come in.

Whatever Happened to Cash for Caulkers? 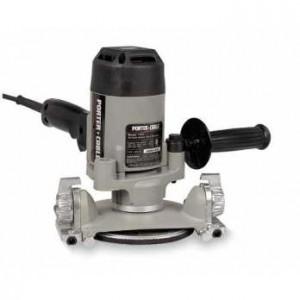 Is This the Answer? Stay Tuned photo from toolbarn.com

Speaking of May and Preservation Month; whatever happened to the Home Star Energy Bill, or Cash for Caulkers, as it was called? It was passed by the House on May 6 and sent over to the Senate, where it has languished ever since. There was a rumor that it was being revived and included with some other legislation, but evidently that didn’t happen. It was all the rage in May and June, as it seemed like a good program that rewarded homeowners for making their homes more energy efficient, and it might provide much needed jobs for small contractors; now no one talks about it. I’m reminded of a few other sensations that seemed to have dropped off the end of the earth such as Pet Rocks and Beanie Babies; I wonder if they’re at the Senate, too?