What does “updated” mean when it comes to the wiring in an old home?

In response to an article about knob and tube wiring, I’ve received many e-mails with questions about old house electrical issues. The age of the wiring in an old home isn’t the only part of an electrical system that can fail or become unsafe. It’s a “system” that has numerous components that have different functions. Many of the questions I receive seem to indicate there are some misconceptions about what the term “updated” implies when an old house has had some recent electrical work.

I see many real estate listings describing that the “electrical is completely updated.” What I typically find is the old fuse box has just been replaced with a circuit breaker panel. I also occasionally see property disclosure statements claim “old knob and tube wiring replaced.” Close inspection often reveals that most of the readily accessible old wiring in the basement was replaced, but is then spliced to the old wiring, just before going up into the walls. It’s quite common to find the knob and tube wiring still active throughout the rest of the house, with numerous safety concerns still present. 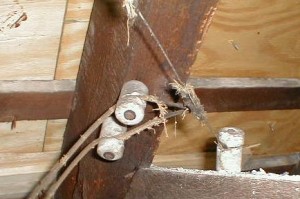 These are some of the most common issues that I find regarding aging electrical systems:

Service Entry Cable
The line from the overhead wires to the meter and from the meter to the main panel has a protective sleeve that is constantly exposed to the “elements.” Older systems have a cloth covering that is often frayed or completely worn through. Some early vinyl sleeves crack and crumble when regularly exposed to direct sunlight. These conditions can allow water to entire the service cable, which then drains into electrical equipment enclosures. Enough deterioration of the cable covering can expose the individual conductors inside to become damaged.

Distribution Equipment
Fuse boxes are an indication of an old electrical system. I don’t consider fuses to be inferior to circuit breakers. They are quite reliable at doing their job–overcurrent protection. The problem is that when fused systems were common, there wasn’t as much electrical stuff in homes and fewer individual circuits were needed. These small panels are often stuffed with more circuits than they were designed for, creating unsafe conditions. When older small panels are stuffed full, there’s often a one or more subpanels added to accommodate the additional added circuits.  I rarely find subpanels wired correctly. 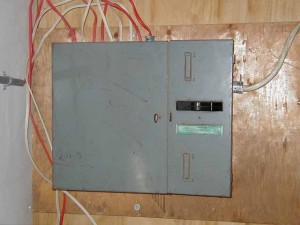 Branch Circuits
In addition to knob and tube wiring, there can be issues with “newer” types of wiring. Early wiring did not have a ground conductor, just “hot” and “neutral.” Grounding wasn’t required until the 1960s. Think of a grounding system as a safety net of the electrical system. Older wires have been exposed to possible damage and abrasion. Previous changes and remodeling could have caused damage to conductors and connections.

Fixtures, Outlets and Switches
Constant plugging in of all of our electrical and electronic gadgets eventually wears out the contacts in outlets. I sometimes find owners try to create the illusion of an updated electrical system by installing new three-slot, grounding type outlets in an ungrounded system. Switches are subject to wear and mechanical failure. Fixtures are frequently changed by homeowners with no professional electrician training and limited skills.

These are just a few of the more frequent issues with a major system, that when fails can cause severe injury, loss of property and life. Like many old-house plumbing systems, the electrical system usually gets updated in pieces and never quite makes it completely up to current standards.

The most important thing to consider is having the electrical system professionally inspected and any repairs, changes or updates performed by a very experienced, licensed electrician.